***Trent: First Optare Tempo for X38 arrives*** ***Trent: more Dennis Lance / Optare Sigmas sold*** ***TM Travel: 6 more Centros due to arrive, and an ex Stageoach double deck coach in service*** ***Trent order 23 new buses from Optare - 12 for Trent 11 for Kinchbus - due spring/summer 2007!***
Here you will find all the latest bus news and sightings for many bus operators in and around the Derbyshire area. If you have anything to report please contact me by clicking here.

Due to a few HTML code problems, a new Fleet News page has been created. News/sightings from earlier in January 2007 can be found HERE.

Mon 12th March:
Leyland National (FTN 697W) has arrived here for rail replacement and school contracts. It was new to Northern General, and then Southern Transit (whose red and yellow livery it currently caries). It has more recently spent time in preservation. Thanks Ian. 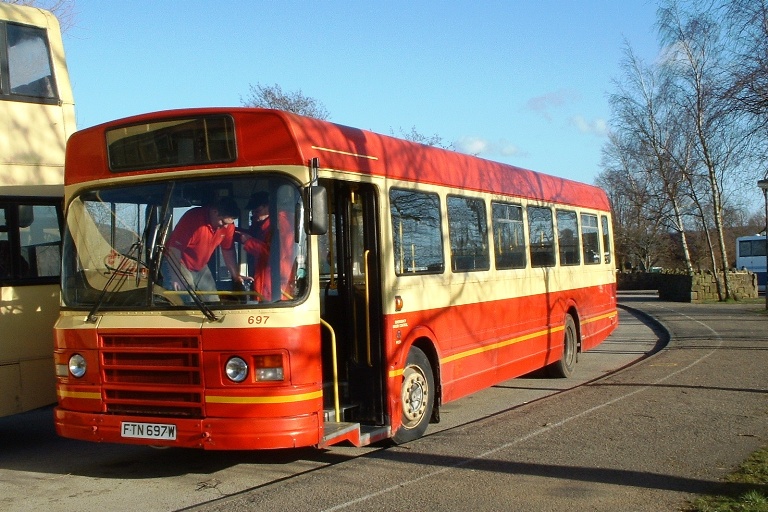 Mon 26th March:
Dale Tringham has found Derby Fleetline (MTV 310W)!! It was hidden on a side street near the airport in Stoughton. it still carries the red livery which was applied when it was at Roberts. 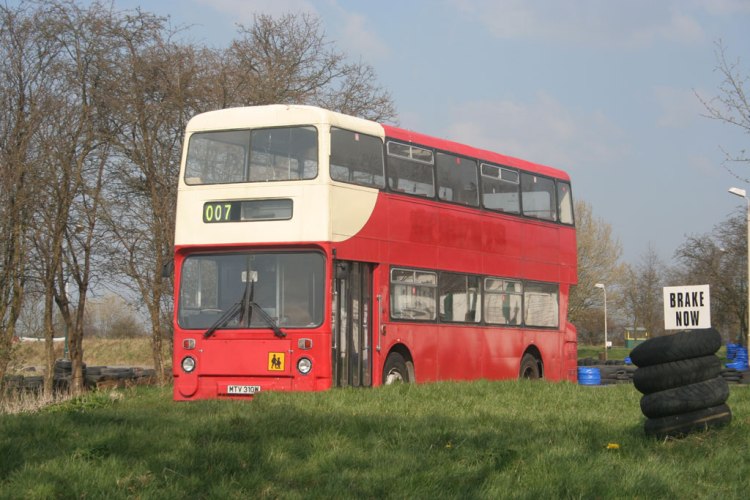 Fri 23rd March:
Not DCT, but former Trent Dart 929 (R929 RAU) has moved to Arrivas Burton garage, and is numbered 2200. Arriva will use it on the X38 (Derby to Burton) service, for which Trent already had it branded. 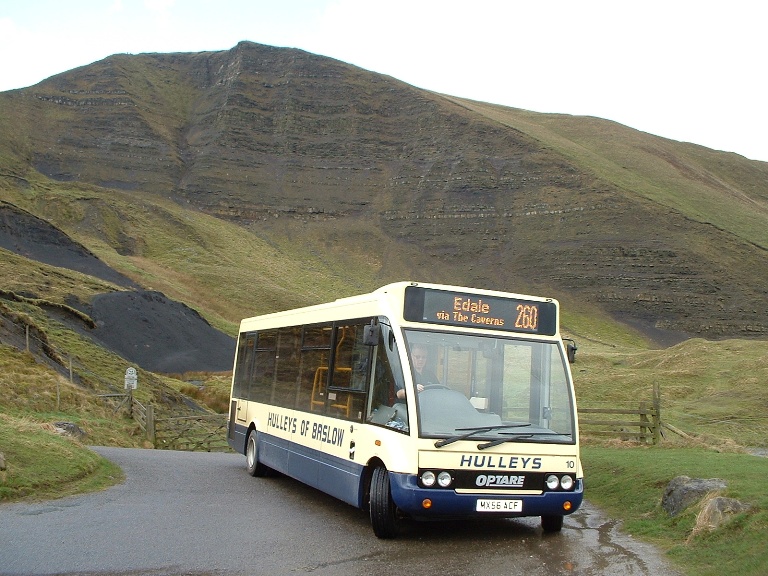 Optare Solo number 10 (MX56ACF) seen on Sunday 25 February at the Blue John Mine bus turnaround above Castleton with the local landmark of Mam Tor in the background when operating service 260 from Castleton to Edale. (C) Ian Moorcroft. 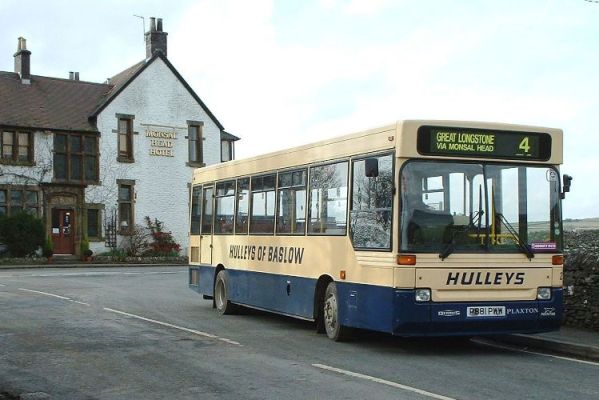 Thurs 15th March:
At least 11 more Olympians are due here soon, some of them for newly won school contracts at Eckington School, which start at the end of this month. Thanks Chris.

Fri 2nd Feb:
The oldest Mark 3 VR in service here, ex Yorkshire Traction (KKY 835P) has had a complete repaint with large Johnson Bros fleetnames on its side, like some of the Olympians. Thanks Chris.

NEWS + SIGHTINGS
Wed 21st March:
Metrorider (R232 SCH) on the 9 today. The Solo was on the usual work that the Metrorider does ( a Bilborough College working). Thanks Paul.

Thurs 1st March:
Former Kinchbus Titans (WYV 62T) and (CUL 119V) have replaced Olympians (YSO 33Y) and (SIL 1324), which have been sold on.
Former TM Travel Delta (RIB 7017) has arrived here via Arriva dealership (Cleckheaton). It is in an allover white livery.
Solo back on the 9 today too, after being towed out of Derby last Thursday. 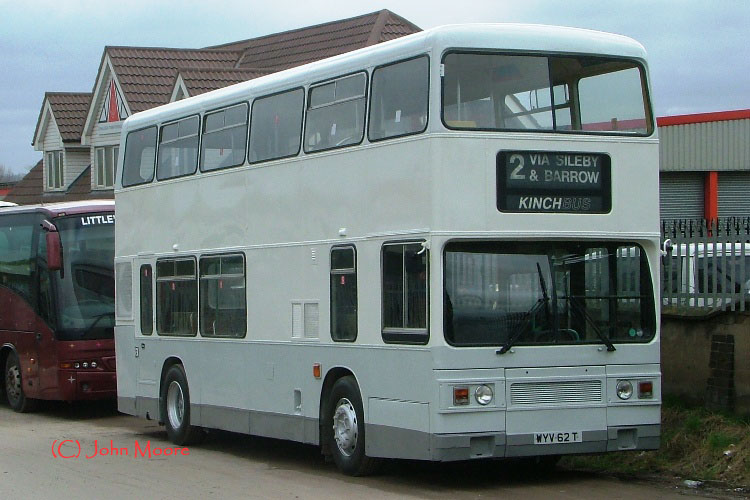 21st Feb:
RM1305 (799 UXA) is no longer with the company, and is now privately owned and currently stored in the Kinchbus yard in Loughborough.

Weds 14th March:
Stagecoach Chesterfield have seen ex-Blackpool/Scottish Excel MK 1 35016 (N207 LCK) enter service today, following an overhaul at Optare, Hellaby. The bus entered service replacing a Solo on the 39 while it nipped to Stonegravels, and then spent the rest of the day on the short 70 to Mastin Moor, following the failure of an Olympian. Thanks Dave.

Fri 23rd Feb:
Former East Midland Bristol VR 151 (OTO 151R) has been preserved in Cornwall.
Atlantean 167 (SUA 123R) is for sale on ebay. East Midland gained this bus when Stagecoach took over Chesterfield Transport, and is ex West Yorkshire PTE/Yorkshire Rider. It is located in Exeter and is now a mobile cafe! Its currently going for Ł1,550.
Thanks Chris.


NEWS
Fri 30th March:
A further 6 VDL / Plaxton Centros are on order - making a total of 14 in the fleet.
Dart/UVG (R562 UOT) has been sold to Lincolnshire firm Cavalier Travel, Long Sutton.
(R83 GNW) shuuld be the next one off once the next Centro arrives, it is sold already even though it's still in service.
(R561 UOT) and DAF/Paladin (KUI 9267) will also be withdrawn soon.

Sun 25th March:
New VDL / Plaxton Centros here are (YJ07 JNN) in TM livery and (YJ07 JVC/E) in all over white livery. The white ons will be brandd for a tesco contract in Sheffield. Thanks to John Moore. 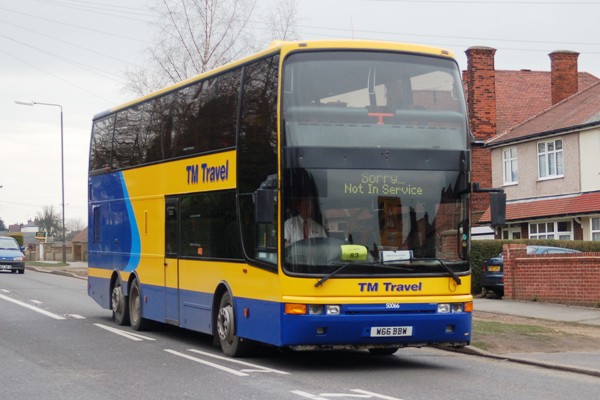 Fri 23rd March:
Chris reports that a further 6 Centro's are on order! Of these 2 will be branded for the Tesco P&R in Sheffield, a contract service previously operated by First. The other 4 are likely to replace Darts (R561/562UOT), (R83 GNW) and DAF/Paladin (KUI 9267).
A "W" reg former Stagecoach "Oxford Tube" branded double deck coach has arrived here.

Sat 17th March:
The third Centro (YJ07 JWU) is expected to be fitted with leather seats, unlike the other two 07 arrivals.

Mon 5th March:
2 more VDL/Plaxton Centros have arrived, (YJ07 JWA/W). A third (YJ07 JWU) is expected soon, along with a new Plaxton coach.
DAF/Optare Delta (J26 GCX) is comfirmed withdrawn, whilst Dart/UVG (R83 GNW) is likely to go when the next Centro arrives.

Thurs 22nd Feb:
3 VDL/Plaxton Centro's are now due here, one more than previously thought. One of these will replace Optare Delta (J26 GCX).
Metrobus (OJD 814Y) is now in North Wales on the Isle of Anglesey with W E Jones, Llannerchymedd. Thanks Chris. 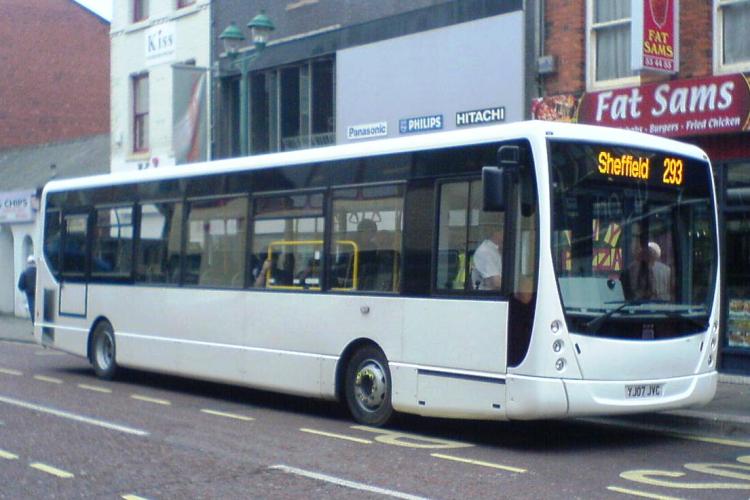 NEWS
Sat 31st March:
Adrian reports that the first X38 Tempo to arive at Langley Mill is (YJ07 VSA). Fleet number 307??
Transpeak Coach 60 is at Langley Mill for a repaint into the new livery - it is the last one to be done.
The Harlequin (HQ) service is to have an increased frequency from the begining of May. Solo 401 will be transfering to Derby, and will be the additional bus for the service. Dart 933 has transfered to Sutton in its place.
Dennis Lance / Optare Sigma 369 has returned to service after accident repairs. 366 will be the next one withdrawn, once Paladin 129 has been painted and prpared for service.
Mickleover Excel 221 is at Langley Mill having Star Trak equipment installed.
Citybus 738 is to be kept for spares for 739!
Coach 62 is back in service after repairs.
Darts 934 and 946 have at times been on loan to Derby from Langley Mill during this week.

Sat 24th March:
Dennis Lance / Optare Sigmas 364/5 (N364/5 VRC) have now left the fleet. They have been sold to UK TravelMaster, of Manchester, via Go Goodwins. Thanks Wes.
Rainbow 5 tempo 306 is back in service after accident repairs.
Coach 62 is currently off the road - will it return to service here?

Fri 23rd March:
Optare Tempo demonstrator (YJ55 BLX) is currently at Meadow Rd, Derby. it is being used for driver familiarisation purposes only, and isn't expected to be used as a service bus by Trent. Thanks Ian.
The new Tempo's for X38, when they arrive, will have wood look flooring, 2+1 seating and air con. 2 red Darts are expected to be on the service until they arrive.
Dart 929 is now with Arriva (Burton Garage) for use on Arrivas half of the X38. It is numbered 2200. Thanks Richard.
Dennis Lance/Optare Sigma 369 has been withdrawn with accident damage. it is unlikely to return to service.

Tue 20th March:
Dart 929 has been sold/or will be on loan to Arriva. Arriva will continue to use it on the X38 service between Derby and Burton.

Thurs 15th March:
paladin 133 is now in service in Unibus livery at Derby. 364 has been withdrawn.
Olympian 712 has been reinstated (now fitted with CTV), and Citybus 738 is expected to be withdrawn soon.
Coach 62 may also be withdrawn - apparently it is not needed!

Mon 12th March:
Xprss Tempo 305 off the road after it sqashed a car in an RTA.
Broadmarsh Bus Station in Nottingham is set to close around December, and a new station due o open next March! Thanks David.
The sixes 6.1 is now back to normal too.
Excel 900 now at Nottingham. Thanks Paul.

Thurs 8th March:
Olympian 712 is expected to be reinstated into service. Arriva liveried Citybus 738 is expected to be withdrawn as a result. Thanks Fred.
Long Eaton Xprss Solo 439 has been repainted into trent barton livery. Thanks Dave.

Tue 27th Feb:
129 is the next Paladin to be prepared for repaint into Unibus livery (132/3 have been done, but have yet to make an appearance in service). I wonder what, if anything, has replaced Olympian 712?
Long Eaton Express Solo 439 is currently being repainted into trent barton livery.

Various liveries can be seen on buses operating for Kinchbus in Loughborough at the moment. Minibuses 39 (N+D livery), 49 (Blue former C5 livery) and 284 (Trent livery, with N+D names!) can all be found on the University Shuttle route 7 during the week. 284 was used on the short 61's Wirksworth to Bakewell (in pre . days), the back being a darker red due to an advert for these "Derwent Valley" services. 7 new slim line Solo's will replace all minibuses on this service (Kinch route 7) later in the spring/summer.

SIGHTINGS
Sat 31st:
Chris reports 900 on Cotrgrave Connection, and Dart 934 and Excel 234 on Mickleover.
Dave reports coach 63 and a Scania bus on the RA.
Dan reports 199 on TP.

Fri 16th:
Chris reports Dart 937 on RA. Solo 447 on Allestree, 234 on Mickleover.
Ian reports Solo 425 on the Amber Line, and Scania 669 on the R5.
Dan reports 101 on high peak Unibus route 6. 106 was on the Derby Unibus route 6.
Dart 936 lost all steering for a time near Kirkby this morning, whilst on route 90. It was replaced, and taken in to Sutton garage.
Perry reports that Calverton Scania 628 has been off all week, with Excel 253 covering. This has meant there has been no spare Excels for R3 or Pronto (252 is away for repairs).

Sat 10th:
Frio Excel 199 back in service on the Mickleover.