Please report any news or unusual sightings by clicking HERE

News:
Thurs 14th September:
Andrews have a new Neoplan 14metre Euroliner registered (YN06 FTX) in full fleet livery. They have also had a 14 metre Setra on demo. Thanks Ian.

News:
Sat 6th:
Dart 2232 was involved in an accident on Saturday, with Olympian 4666 also being involved in a less serious collision.
A bollard on the Morledge got in the way of one of the Volvo salloons too!

Weds 3rd:
Mercedes minibus 1160 is on loan to Derby. Thanks Richard.
Olympian 4665 has had its tree guard removed for some reason.

Thurs 28th December:
DAF 4744 has been totally repainted after accident damage. Strangely it retains the same amount of cream/stone.

Fri 29th December:
Olympian 4640 on the Oakwood routes this evening. Excel 2998 on the Chellaston routes. Thanks Richard.
Dart 2235 on route 19 to Spondon.

Fri 22nd December:
The Volvo/Alexander bus was on the BC, and the Dart was on the 59.

News:
Sat 25th Nov:
A new coach here is (BF03 HOF) from Hellyers, Fareham - who went bankrupt last month. It is still in the former owners livery. Thanks Duncan.

News:
Thurs 18th Jan:
The Optare Excel (number 5) is still at Optare Hellaby. It was due to be collected last week, but the bus did not cooperate!! It has not been fitted with an upgraded engine. Thanks Ian.

A photo can be found by clicking here.

Thanks to Ian Moorcroft for the above information.

News:
Sat 6th January:
The Darts and the Titan have returned after being repainted. 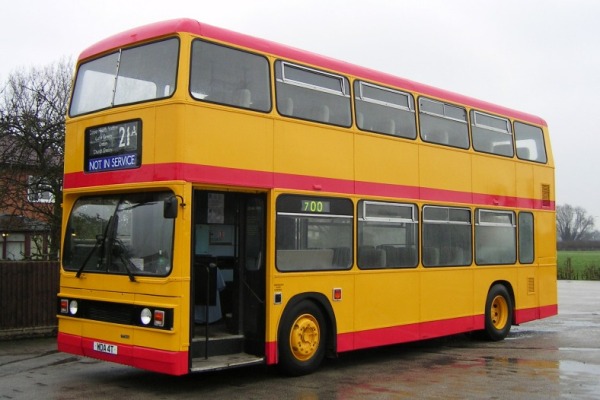 Thurs 21st December:
Darts 15 and 42 (see below for details) have now been repainted into Midland Classic livery, and are set to have fleet names applied at the weekend. Thanks John.

Mon 4th December:
Three Darts are now in the fleet - click the links to see photos:

All should be in Midland Classic's livery soon.

Here are two more photos, one of Olympian (C184 YBA). and another of a dressed up Routemaster (799 UXA).

Thanks to James Boddice of Midland Classic for this information, and photos. The fleet list will be updated soon!!

News:
Thurs 18th Jan:
Darts (N211 YJE) and (L8 NCP) have been withdrawn and sold to an operator in the Manchester area. These were painted all white before they went. Thanks Chris.

Sat 16th Dec:
Dart (R554 UOT) is now with Ogdens, St Helens. It has been there since some time in October, and is said to be "on loan". It carries all over white livery and has joined other former Marchwood Darts (R563/4 UOT).

News:
Sat 20th:
Trent have placed an order with Optare for 23 buses. 16 Tempos and 7 Solos have been ordered, all of these are to be fitted with high back leather seats. The announcement was made by Optare, and can be viewed on their website.
Trent have yet to announce what routes the new buses will be used on.

Thurs 18th:
The Dennis Lance/Optare Sigma's that are now with Go Goodwin Bus & Coach, have been registered.

Wesley kindly sent some photos of these. They can be viewed on the Forum, by following this link:
Click here to view photos on the Forum.

Fri 5th:
Darts are now expected to be put on the 6.1 for the duration of the road closure. 3 or 4 will be needed, depending on how things are worked. 933/5 are expected to be amongst the Darts used. At least 2 sixes Scania's will be "spare".

Thurs 4th:
900 is to be repainted into trent barton livery (not N+D).
Hospital Dart 950 is away for repair, as are Allestree Solo 460 and a sixes Scania.
The Midland General service 146 is now set to continue until the summer, with minibus 821 remaining (no longer for sale).
The sixes 6.1 will temporarily be using Solo's from the 15th January for around 2 monthes, due to an awkward diversion at the Blackbrooks Crossroad. Either 3 or 5 Solos will be on the route (depending on if the whole route, or just the Belper to Bakewell section is covered by the smaller buses).

Sat  30th December:
Several buses are For Sale, including the remaining Optare Vectas, which are advertised as needing new engines, after being stored out of use at Langley Mill for several years.
Kinchbus Titans 772/3 are stored at Langley Mill, pending sale as are minibuses from the notts and derby and kinchbus fleets. These include 38, 39, 44, and 817.
Sutton minibus 821 is also for sale - it may be replaced by something smaller on the Sutton route 146 (if this continues) - a Ford Transit has been suggested!!
Kinchbus driver training Darts 889/90 and 893/4 are also for sale.
Paladins 101, 126, 129, 118, 133, 125 are currently out of service at Langley Mill. The M reg examples are expected to be painted up for the Unibus network at Derby, replacing the Dennis Lance/Optare Sigmas, which are expected to be sold.

Former Skyline Excels 208 and 209 are also withdrawn at Langley Mill, although only 1 is advertised for sale. So the other is either being retained, or already sold!
Nearly all buses in the trent barton fleet are now repainted, with just a couple of Solo at Langley Mill carrying Trent buses livery. These are expected to be repainted anytime now.
The road at Blackbrook crossroads, belper will close from 15th January for up to 2 months! This will distrupt the sixes 6.1 (again). It is likely that the 6.1 will stay on the A6 with shuttle buses (Solos) connecting at each end.
No news on 900 yet (repainted into N+D or trent barton?). Allestree Solo 460 is still away at Opares Unitec workshop.

Sat  23rd Dec:
Excel 900 *MAY* be painted into Notts + Derby livery!!
Skyline Excel 261 is away at Optares with an electrical problem, whilst Frio Excel 199 has been restricted to town services, due to a problem with its turbo.
Solo 414 has returned from the paintshops in trent barton livery.
Former Trent Deltas (J303/4 BVO) have turned up with Tyrer, Nelson, Lancashire (from Dukes travel).
Former Trent Bristol VR (BRC 836T) is now in Hollywood - with Star Line Tours (from Hedingham).

Wed 27th:
Excel 161 reported on the Mickleover, it later being on the D1 P&R as an extra bus. Thanks John.