***Trent: Transpeak coach goes up in flames.*** ***Arriva Derby: 2nd batch of Solos start to arrive*** ***Littles: 4 former trent ECW Olympians acquired*** ***Harpurs: 2 EY Olympians arrive***
Here you will find all the latest bus fleet news for many bus operators in and around the Derbyshire area. If you have anything to report please contact me by clicking here. Search this site.

Brand new Volvo B12 / Plaxton coach (YN58 NDF) has not yet been used, so has been re-registered as (YN09 AOT) ready for March. 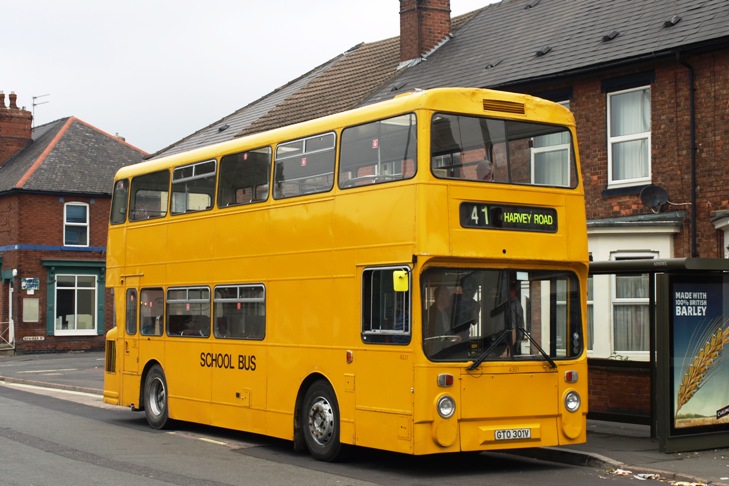 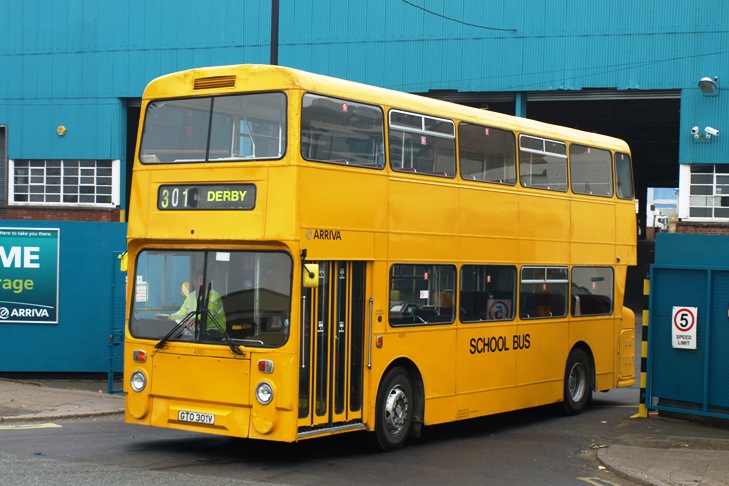 23rd June:
Ensign have sold former Derby Citybus 135 (B135 GAU) to Fowlers, where it joins other DCT vehicles. 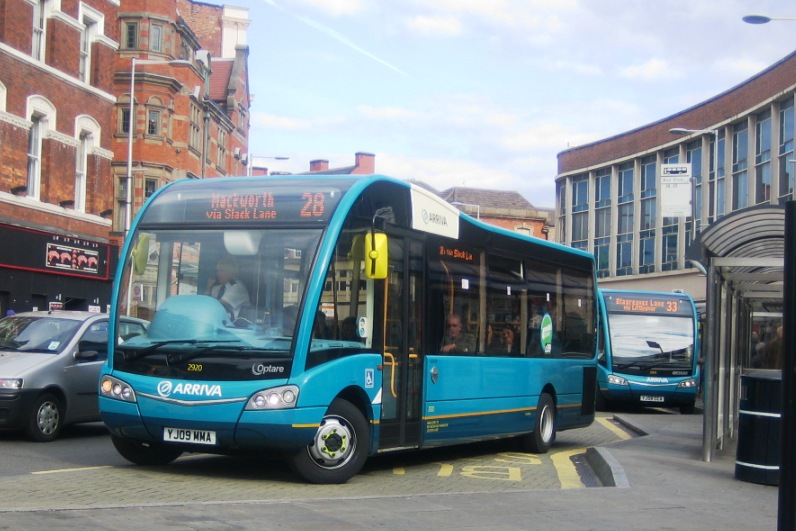 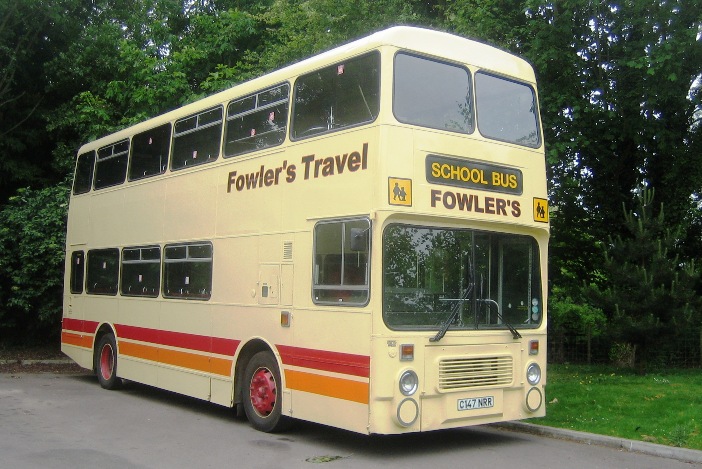 
NEWS
1st May
the latest vehicle to join the fleet is (S602 ACT) a Mercedes Vario mini-"coach". Ex Slacks, Matlock? 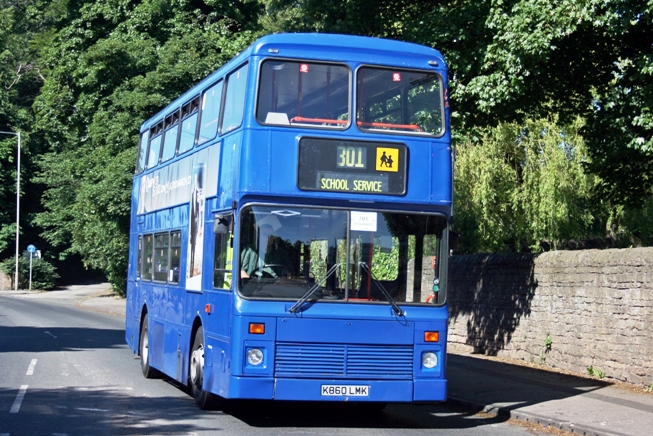 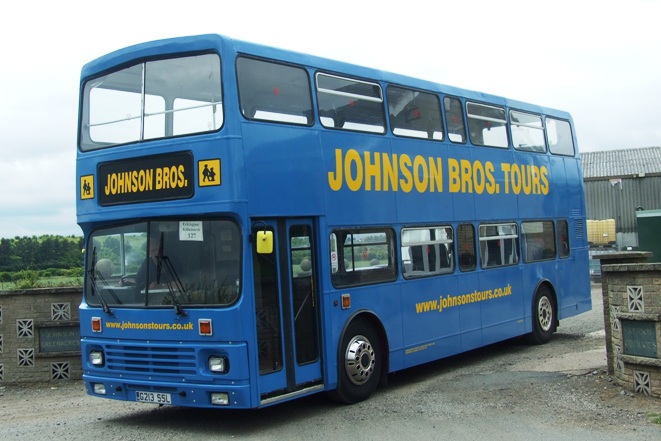 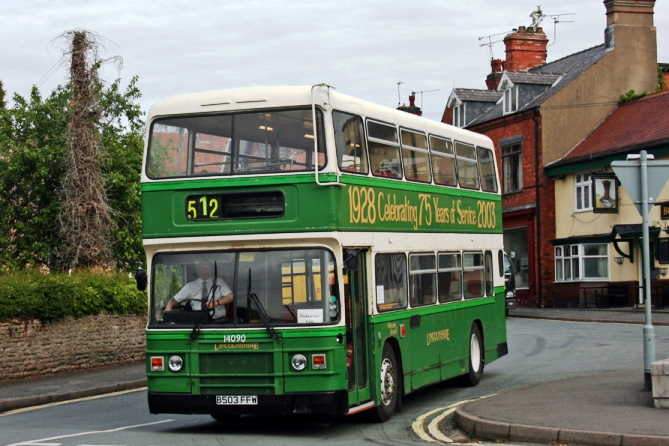 22nd May
Alexander bodied Olympian (G213 SSL) has been painted in Johnsons Bros livery. The destination blind has been removed and replaced with a fixed school bus display.
Coach (SF07 XNU) has arrived from Parks of Hamilton and carries revised Johnsons Bros names on a black and gold livery. 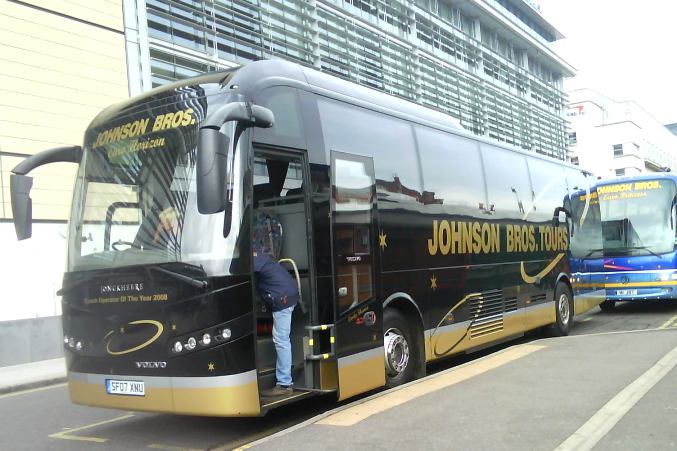 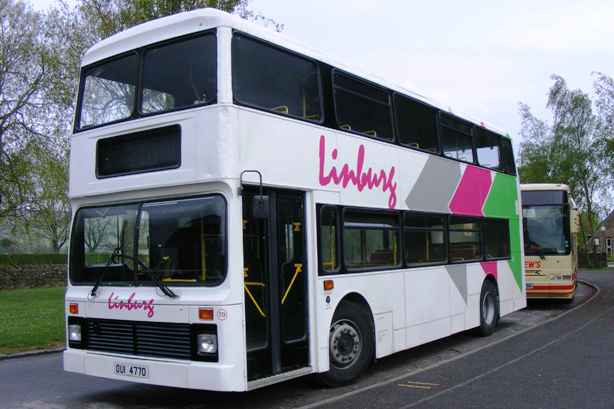 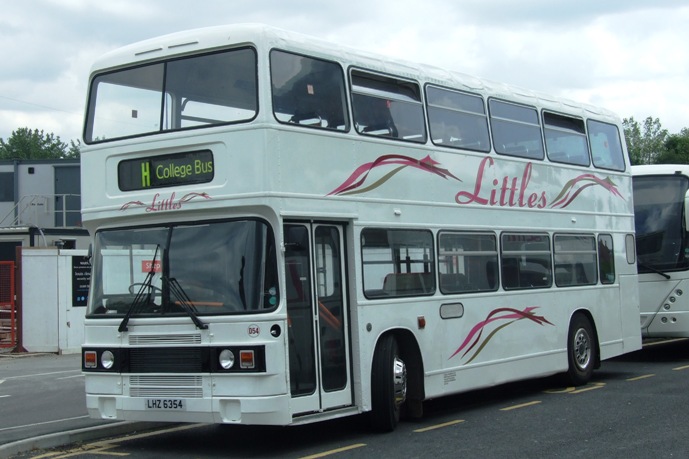 2 Titans and the two MAN double deck coaches are liekly to be withdrawn as a result of the recent arrivals. Subject to confirmation!
2 Daf/Marcopolo have also arrived here. 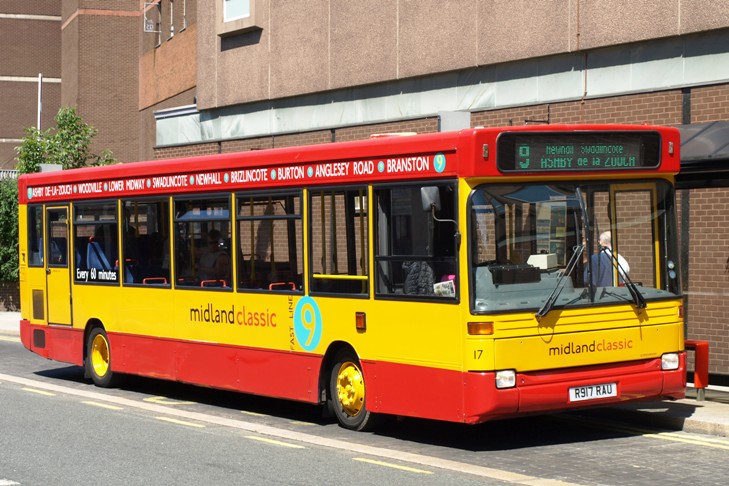 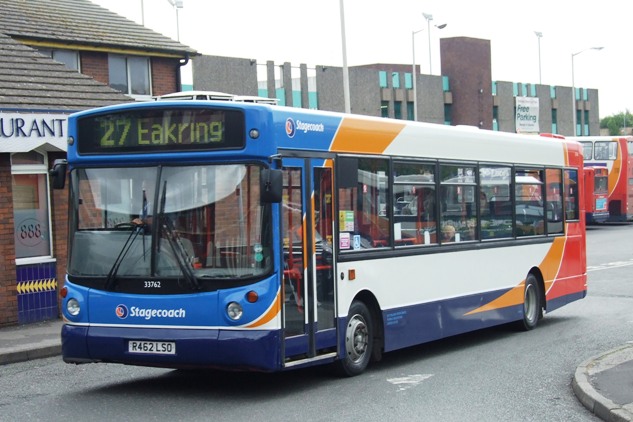 All of the former Pronto liveried Darts have now been repainted into standard livery.
(C) Daniel Stone

7th May
Pointer Dart 32532 (R702 YWC) has arrived from Stagecoach Manchester and is now in service.
NC Dart 32932 (N108 CET) has been withdrawn due to Engine Failure.
Dart SLF 35236 (YN56 OMS) is currently on loan at Ecclesfield and should then transfer back to Rawmarsh.

Worksop: Some Volvo B10M/Paladins and MAN/Alexanders have been transfered to Worksop from Gainsborough and Grimsby. More soon. 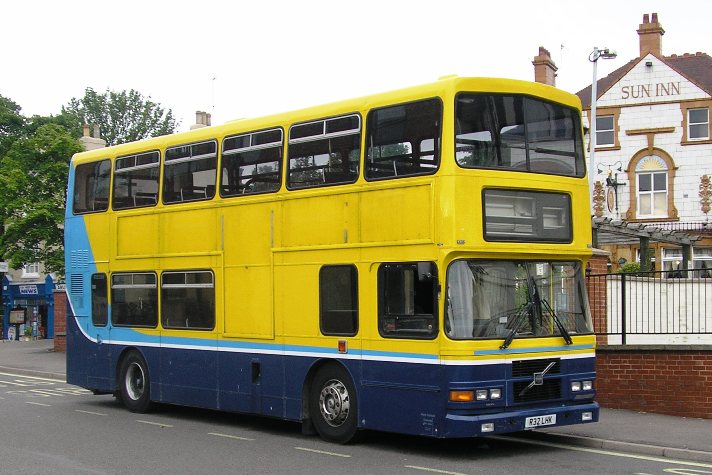 7th May:
Marshall bodied Dart (W371 ABD) has arrived here, and is in use in all over white livery. It is thought to be on loan. 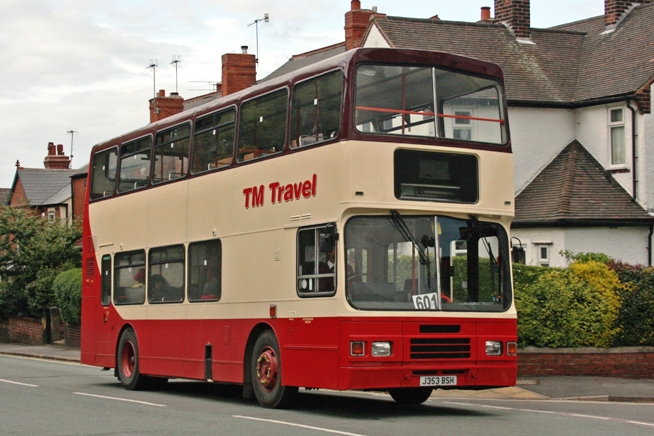 Former Arriva London Leyland Olympian/Alexander decker (J353 BSH) as it left Chesterfield through Boythorpe today, on one of the college routes. This was originally L 353.
(C) Tony Wilson

The hospital link Solos have also begun to arrive at Langley Mill, painted in a blue livery. The first to arrive is:
480 (FJ09 MWF).

Former Mickleover Excel 224 is expected to be repainted into transpeak livery to replace fire damaged coach 56.
Former H1 Solos 432 and 435 are now painted into trent barton red, joining 433 and 434 at Langley Mill.
Solos 402 and 404 have transfered from LM to Sutton.

Darts 896/8, 905 and 909 are fairly recent withdrawals.
Many withdrawn Darts re-appeared in operation with notts+derby whilst Download Festival shuttles were in operation last weekend. These included Villager branded 927!

10th June:
Citybus 39 and ECW Olympian 23 are now back in use with notts+derby.
The 6 Citarios for the Calverton Connection have been delivered, some of the Rainbow 2 Volvos have arrived too.

2nd June:
Transpeak coach 56 was destroyed by fire in Ashford in the water on Friday (May 29th). The images below are provided courtesy of the Matlock Mercury. For more impressive photos, click here to go to their website. 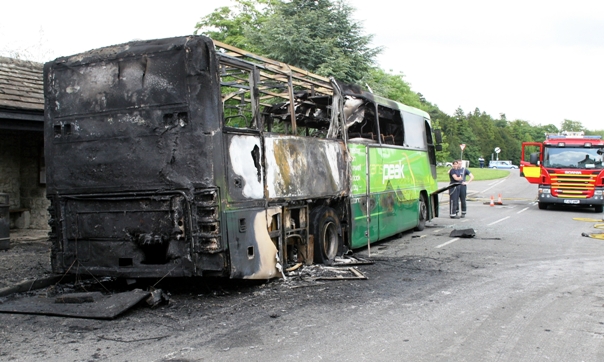 The remains of 56 after the fire in Ashford in the Water last Friday.
(C) Matlock Mercury www.matlockmercury.co.uk. 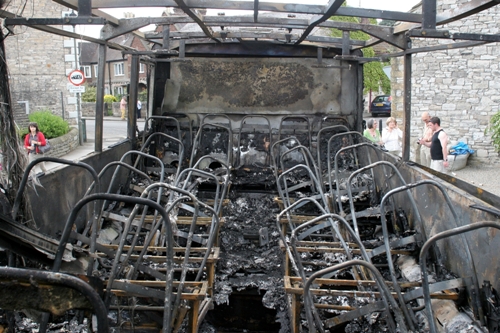 The extent of the damage inside 56.
(C) Matlock Mercury www.matlockmercury.co.uk. 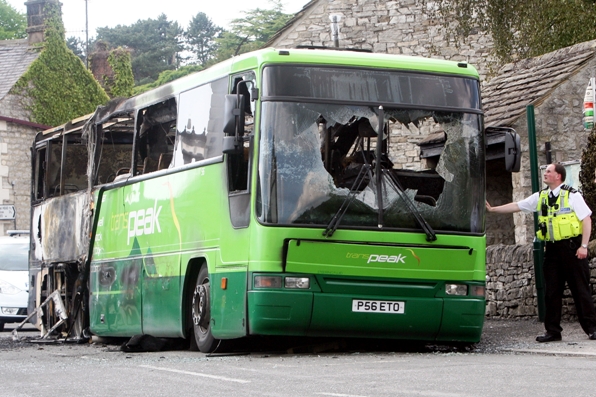 Citybus 39, Olympian 23, Dart 927 and several trent barton Darts are expected to make a return for use on the download festival shuttles.
Vario 288 has a damaged roof, due to a bridge being too low!
Paladin 106 now carries Notts+Derby livery, although the blue is a different shade.
Lothian Olympian number 10 is now back from repaint. Only 15 and 16 remain to be painted. 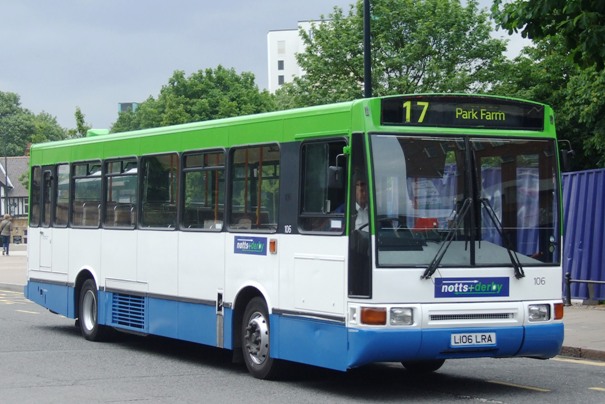 Paladin 106 has been painted a shade different to other N+D examples.
(C) Daniel Stone 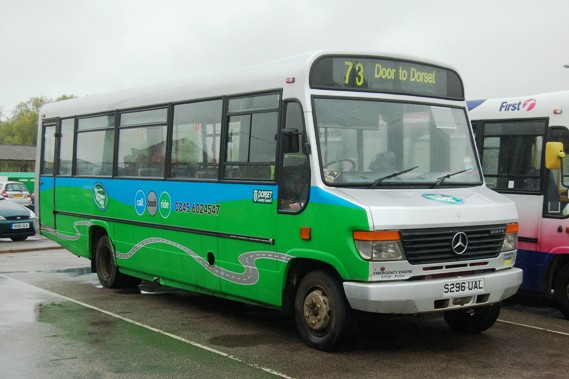 Former Trent Vario 296 in Dorset where it is used on the County Councils door to Dorset service.
(C) John Moore 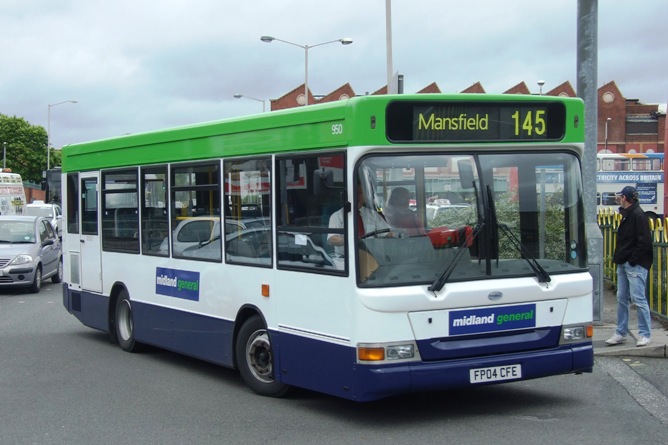 Former Hospital Hopper MPD 950 (FP04 CFE) has recently been repainted for use on the Midland General route in Mansfield.
(C) Daniel Stone

Villager Dart 942 (S942 UAL) has been sold to Procters, Hanley.
MPD 950 has been repainted into notts + derby livery. It has Midland General names applied for use on route 145 from Sutton. It has replaced 910, which is currently at Meadow Road.
Lothian Olympian 11 has returned from repaint into nott+derby livery.

Former nines Solos 443 and 445 are at Langley Mill for repaint into trent barton red. They should be continue to be based at Sutton.
Dart 898 is now withdrawn and advertised for sale. Mini Excel 900 has been withdrawn too.