All but two of the new Scania Omnicitys are on the road on the Chellaston services. 3567/74 are yet to be put into service.

Dart 2234 has been withdrawn, and 2216 has transfered to Burton. Oympian 4666 has also been withdrawn after its short use at Burton.

6th April:
Following the loss of 5 Chellaston school contracts to notts+derby, Olympians 4626/7/9/65 have been withdrawn.
Additions to the Midlands fleet are Scania Omnicities 3578 (YN55 RCF) and 3579? (YN05 HGC). The first Optare Versa for Burton garage has arrived too.
Olympian 4643 (R643 MNU) has appeared in service with Hedingham, via Ensign. 4642 has also gone to Ensigns.
Olympian 4666 is currently at Burton, in place of Dart 2092 which is at Derby.

The following 11 new Omnicitys have arrived at Ascot Drive:

NEWS
7th April
A new arrival here is MPD (SN03 DZY). It is branded for "connect 19" Macclesfield - Prestbury, a service that has just been transfered to Bowers. The MPD was previously used by Arriva on services 392/3 Macclesfield - Stockport. Bakerbus now run these services with new Enviro 200s, leaving the two MPDs surplus to requirements. The second Arriva MPD (SN03 DZZ) has transfered to GHA coaches where it is used on the connect 88 service click here for a photo. Both buses are owned by Cheshire East Council.

609 and 612 have not been repainted as previously reported. 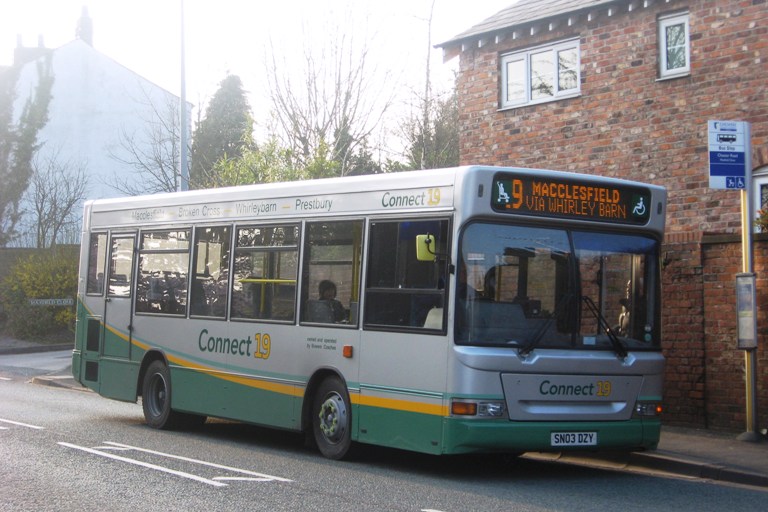 A recent arrival is MPD (SN03 DZY). The bus is operated on route 9 for Cheshire East Council .
(C) Nick Mannion

24th March
Varios (R823 MJU) appear to have been withdrawn. It was parked with (LKZ 3614) in the Centrebus yard at Hinckley early last week. Both retain Bowers fleet names. 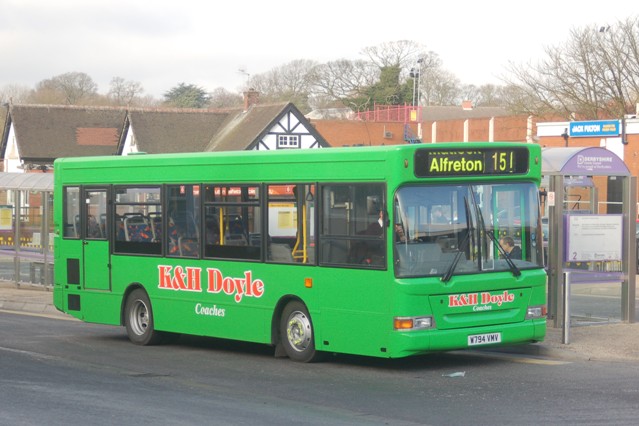 (W794 VMV), one of two MPDs purchased in February is seen here in Alfreton, painted in a new livery.
(C) John Moore

At least 2 green Mini Pointer Darts, (W793/4 VMV) have arrived here. Thanks to Mr Moore for this information. 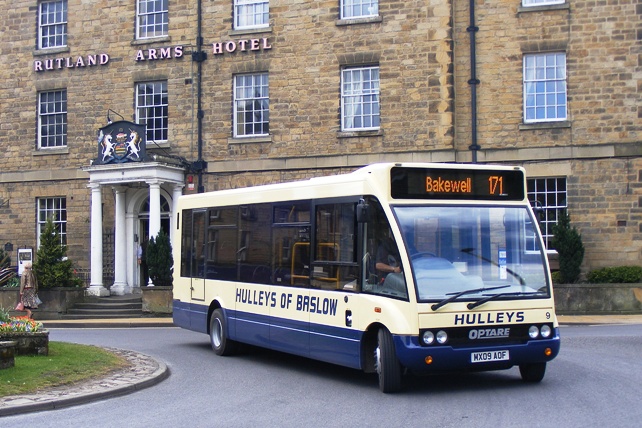 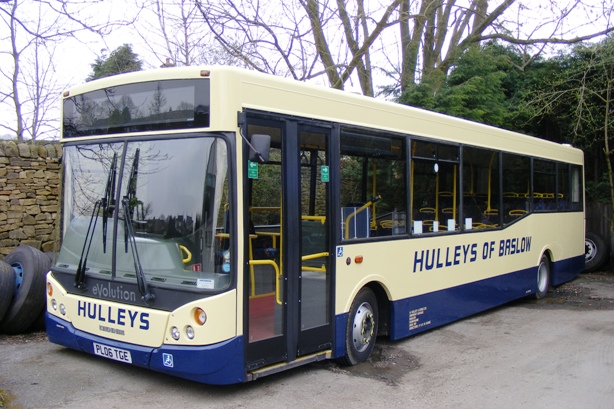 One of the latest additions to the fleet is this MCV Dart.
(C) Ian Moorcroft

9th March
The Scania / Van Hool number 3 (M222 DDY) has finally been sold in a part exchange for Dennis Dart SLF / MCV Evolution (B40F) (PL06 TGE). The later is currently painted white. It has been in use on schools, but should be painted before it is used on regular service work. The Optare Excel is likely to be withdrawn as a result of the MCVs arrival.

The Vario in the fleet should be replaced by a new Optare Solo (MAN) in April.

22nd February
3 Spectras have been sold to Beaverbus, Leicester (not Macphersons as reported last month).
A 4th Spectra, (K306 FYG), has been sold to M Travel, Huddersfield.
A new arrival at Mansfield Woodhouse is Alexander bodied Olympian (G213 SSL), which has arrived from Stagecoach bluebird.
Many thanks to Duncan Binghamfor the above. 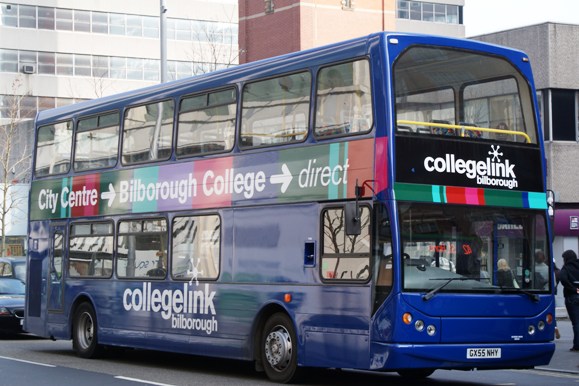 The latest addition to the fleet is (GX55 NHY).
(C) Perry Jest

2nd April
A new addition to the fleet is former Trent "Villager" Dart (S941 UAL). This is numbered 41. 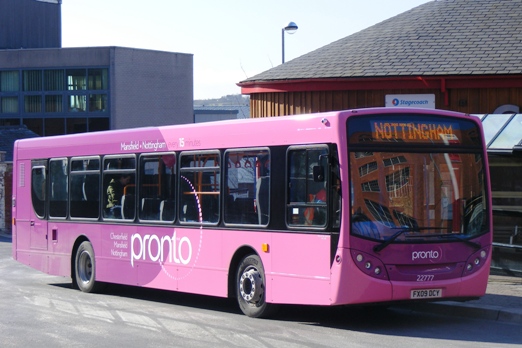 20th March
The second ex Rapsons Excel, 35025 is now in service in Chesterfield.
Volvo/Jonkhere coach (S670 RWJ) is back at Chesterfield and repainted into unbranded training livery. 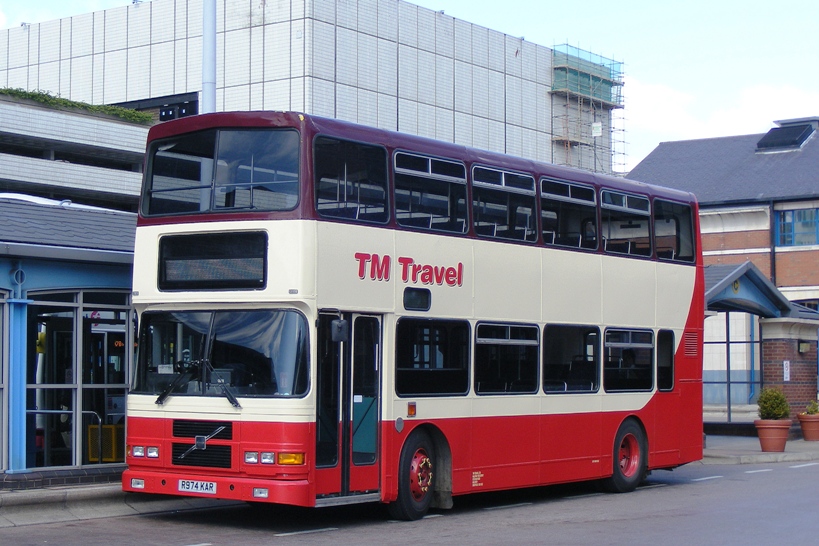 Olympian (R974 KAR) is the first decker to be painted in the new livery. It is seen here at Sheffield Bus Station.
(C) Ian Moorcroft

9th March:
An Olympian, with an Irish plate, reported at Halfway garage, painted in the new style livery thats carried on the majority of the single deck fleet.

5th April:
Former route 15 Solos 452/3/4/6 have had route branding applied for the Derby Hospital "H1" route, which trent barton will run from tomorrow. This consists of a white trent barton style circle, and white lettering on the bright orange livery. It is thought the vehicles will only be on the service in the short term, before new buses arrive later in the year. The future of MPD 950 and vario 276 is unclear. Solo 455 now carries Radcliffe Line branding. 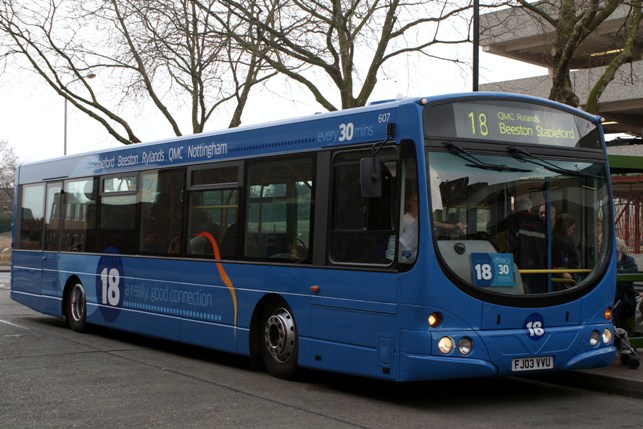 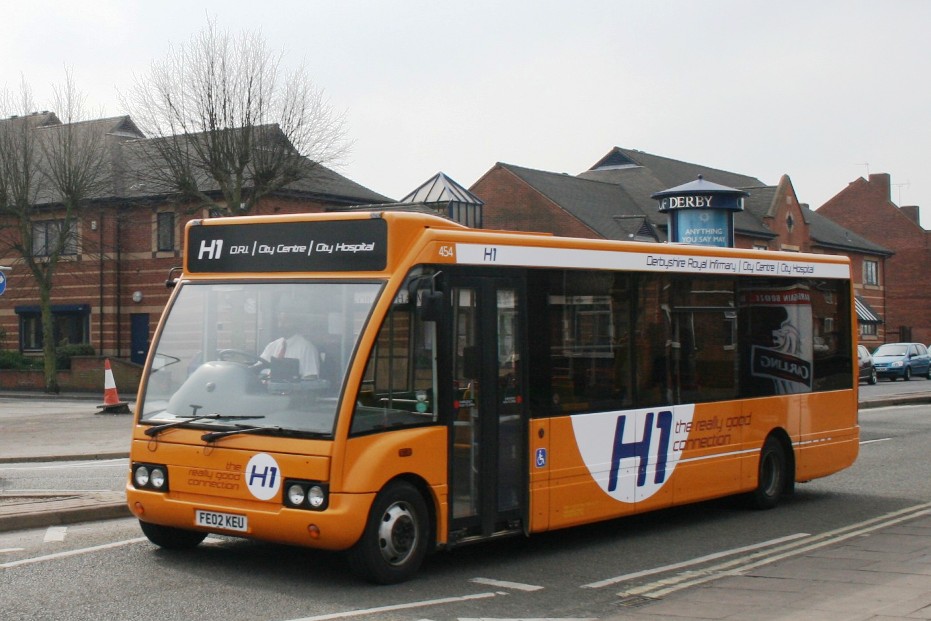 Solo 454 is one of 4 Solos now branded for the Derby Hospital service H1. It is seen here on Burton Rd.
(C) Dave Allen

2nd April:
Scania 637 has transfered from trent barton at Langley Mill to Kinchbus at Loughborough. It is painted yellow and branded for the Derby Skylink service (like the Centros), which has now been extended from Loughborough through to Leicester.

All of the ECW Olympians are now withdrawn.

Former R5 Scanias 609-12 are now in service, branded for the Pronto route.
605 to 608 are expected to be in service next week. They have been painted pale blue, and branded for Nottingham route 18.

Optare Delta 319 (J319 BVO) has been sold for scrap to a Barnsley company, by McKindless, Wishaw. 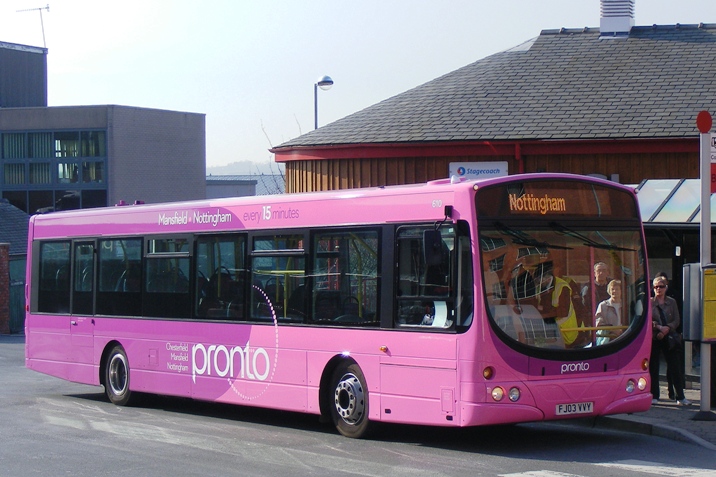 24th March:
2 new brown Solos have been delivered to Sutton garage - thought to be (FJ09 MVR/T) or similar.
Former trent Vario 283 (R283 RAU) is now in Glasgow with Morrow.