NEWS
7th September 2020
Nottingham University branded E400 4544 has lost its branding, and is now in use on local services in Derby, replacing spare 4545, which has returned to Leicester as a result.

21st June 2020
E200 MMC 3102 (YX17NLC) and 3104 (YX17 NLE) are currently in use here. They still carry the blue and white livery for the east midlands airport car park shuttles, which they were used on last summer. 3101 has has had the centre door removed and has been repainted in standard Arriva livery.

Currently the Volvo Geminis and Scania Omnicities / Wright Scania saloons appear to be SORN, with the E400s, Streetlites and VDL saloons making up the fleet that is in use. 15th January 2020
Cadets 2745/6/8 remain is use, on loan whilst other buses in the fleet are repainted / have exhausts upgraded. Volvo/Wright Eclipse 3927 remains in use for the same purpose. VDL 3763, and Omnicities 3566 and 3572 are the last vehicles at Derby in the old style inter urban livery (apart from loaned vehicles). 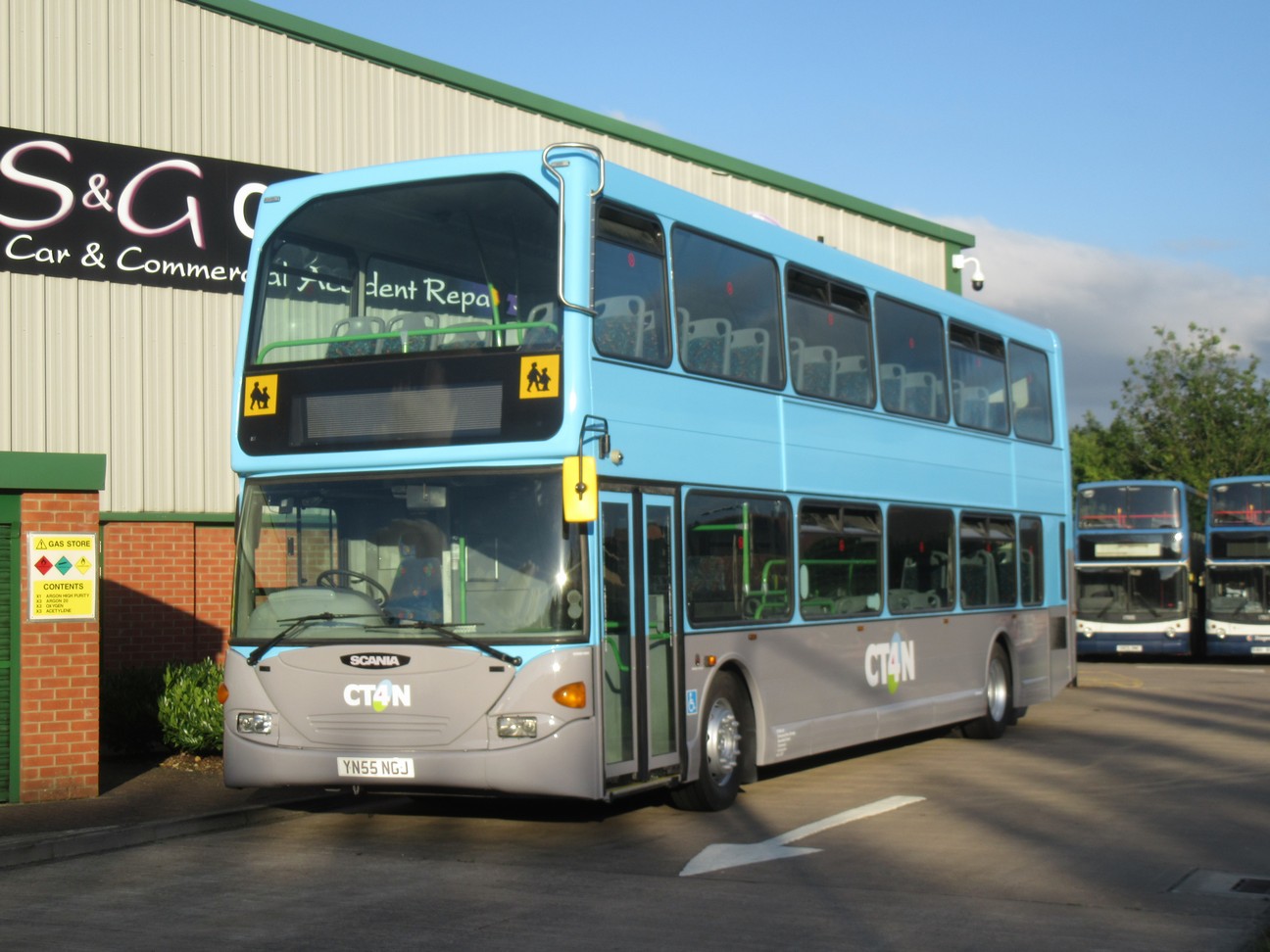 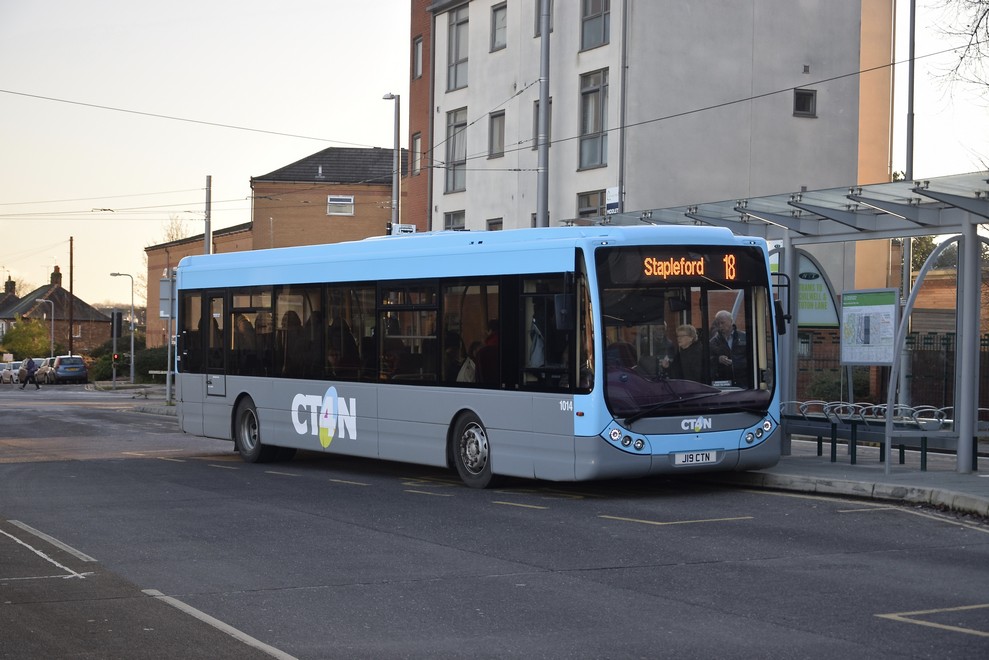 (YK06 DNU) is one of two BMC Condors now in use here.
(C) Chris Gaskin 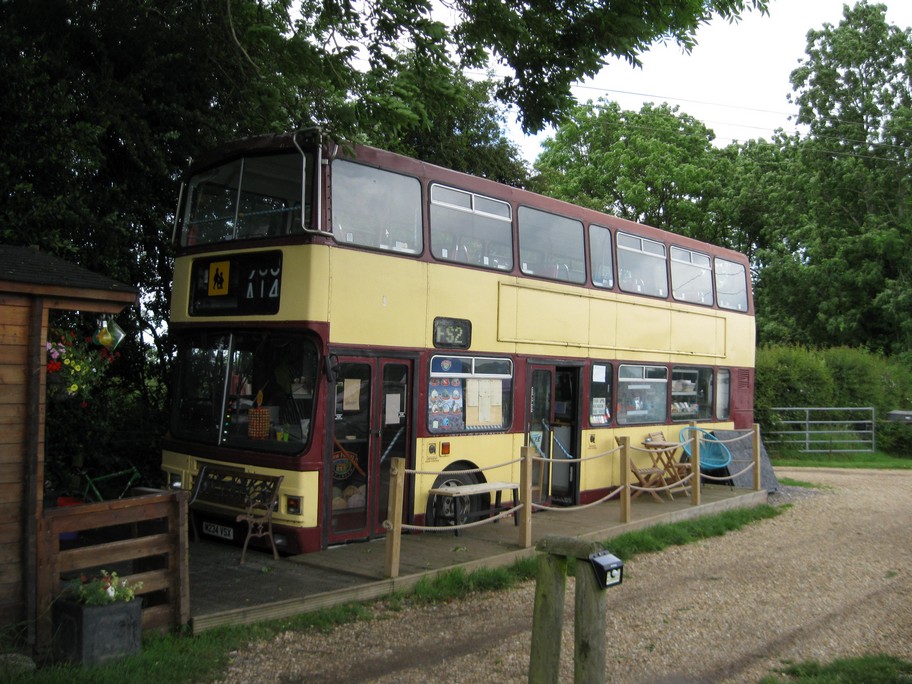 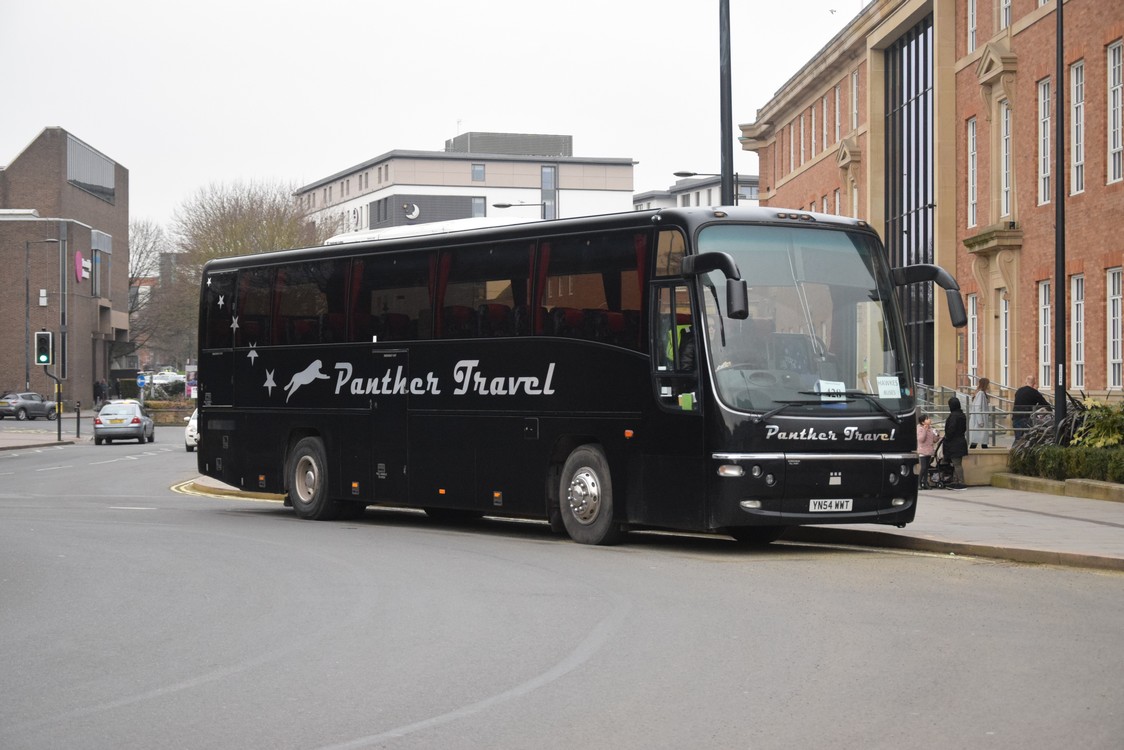 News
23rd September 2020
A fairly new addition to the fleet, in new centrebus livery, is Optare Solo SR 296 (KX14 FHT). This was used in Malta when new. 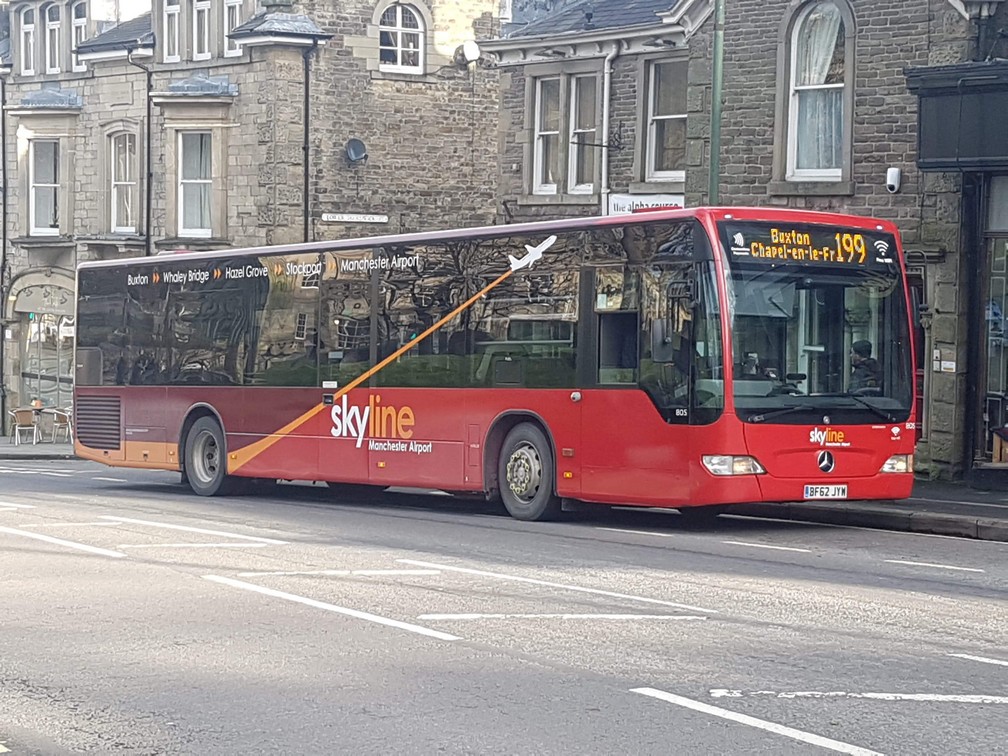 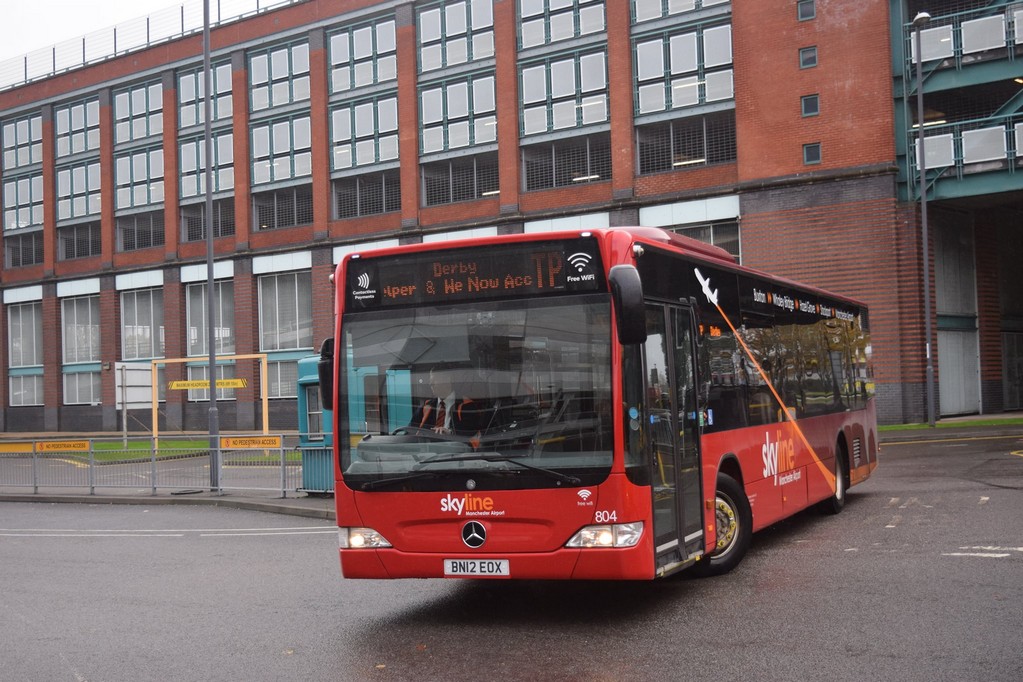 NEWS + SIGHTINGS
7th September 2020
A new addition to the fleet is reported to be former Metroline Enviro 400 (LK09 EKU).

31st July 2020
Hulleys have painted Enviro 15 in Silver Service livery to celebrate 100 years since the formation of that company.

Solo number 9 has been advertised For Sale. 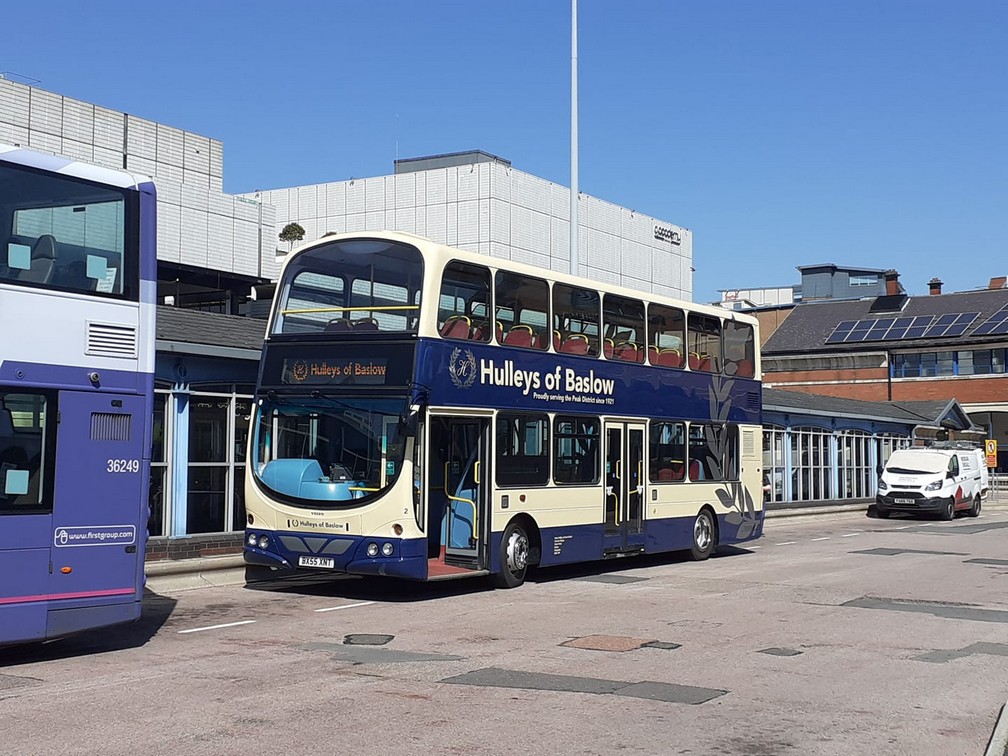 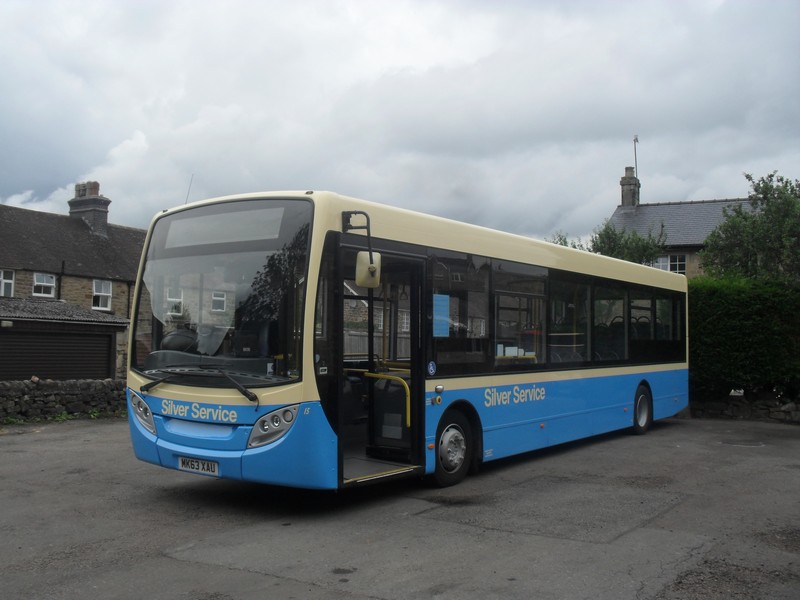 Hulleys have painted Enviro 15 in Silver Service livery to celebrate 100 years since the formation of that company.
(C) Adrian Healey

14th July 2020
The last MCV bodied bus, Dart 18 (PL06 TGF) has been withdrawn with engine problems, and will probably be scrapped. The replacement 18 is another ex Epsom Buses Quality Line via Whippet, Cambridge, in the form of Optare Solo 18 (YJ 11 EJD). This will enter service shortly in all over London red like sisters 4 and 10.

11th June 2020
Ex Travel De Courcey Versa (YJ62 FTN) has joined the fleet as the new number 1 in fleet livery.
Ex Blackpool Solo (YJ07 EJC) has become fleet number 13, and has also been painted into fleet livery.
Solos 4 and 10 are now in use in red livery.

30th May 2020
Solo 1 (MX06 ACV) has been sold to Stafford Bus Centre in part exchange for a 12 plate Optare Versa (Ex De Courcey, Coventry). This has gone for repaint.

Two new arrivals are former RATP Quality Line Solos in the shape of 4 (YJ11 EJA) and 10 (YJ09 MHN) (former 20252/47). Both are still in London red but expected to enter service prior to repaint.

New arrival Solo (YJ07 EJC), ex Blackpool fleet number 287. This has arrived in Blackpool livery but will be painted before entering service. A second from the same batch is also due.

6th May 2020
New here isVolvo B7TL / Wright Gemini (BX55 XNT), which has become fleet number 2. New to Abellio London as its 9064, and purchased from its last operator, Peoples Bus, Liverpool in whose livery it still carries. It will be painted in a variation of fleet livery. It is for use on a school service from September. 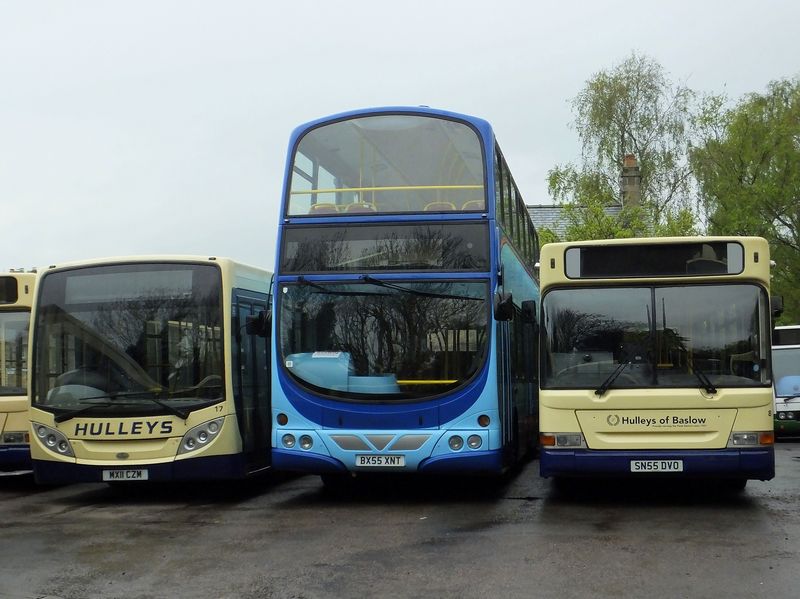 20th April 2020
A new arrival here is Volvo 2 (YJO7 PCF) ex Lancashire United. It has arrived in fleet livery, but is currently SORN.
A Volvo B7/Wright Gemini is set to join the fleet in the next couple of months.

Services 14 Sandiacre to Ilkeston and 29 Sandiacre to Long Eaton have been temporarily been taken over by Hulleys, as CT4N are understandably not operating services at this moment. 1 bus is required, this usually being Solo number 1.

Number 2 has been scrapped. 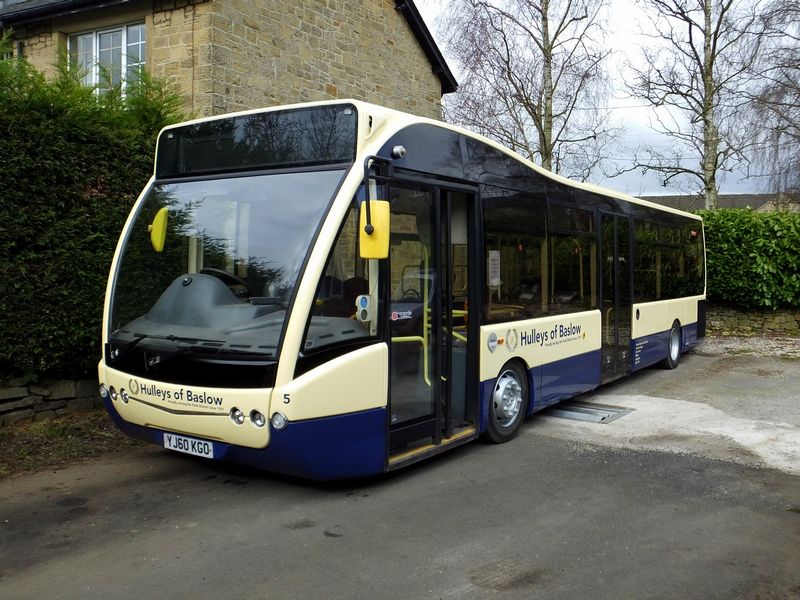 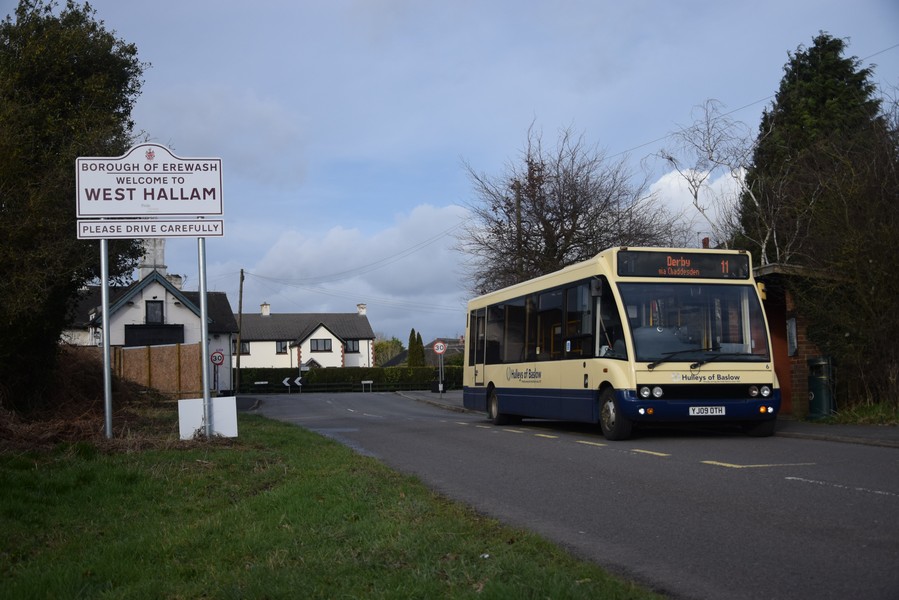 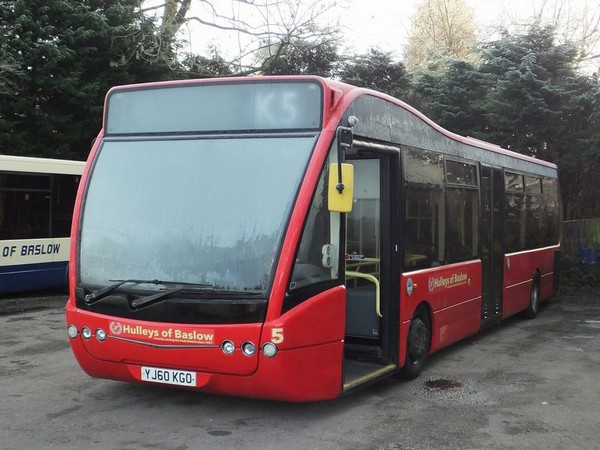 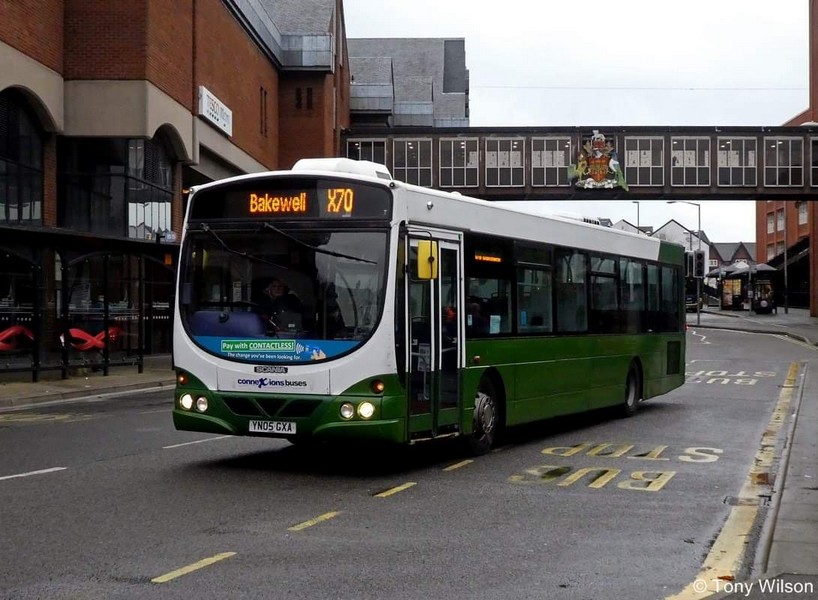 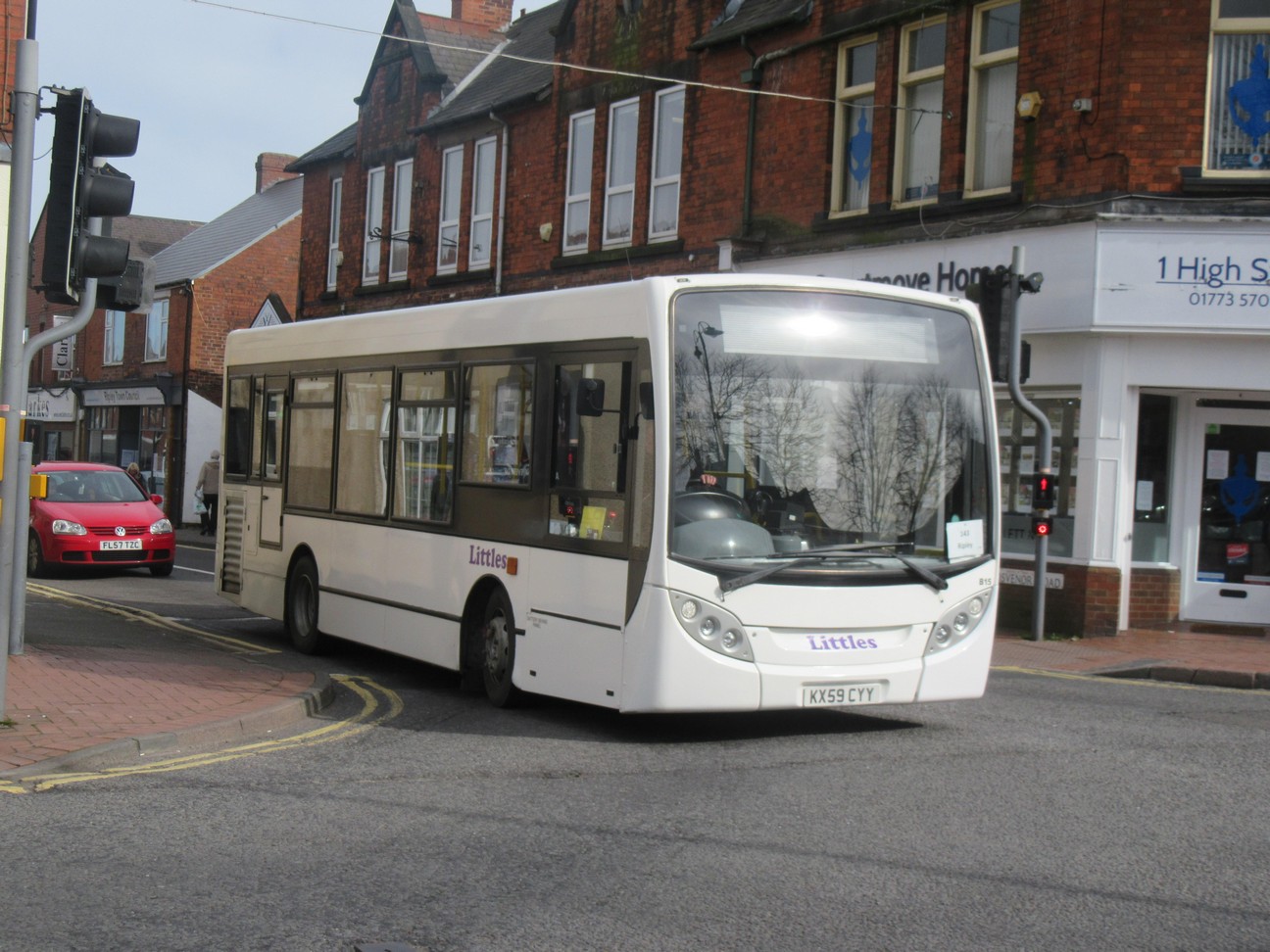 B15 seen here in Ripley in March.
(C) Daniel Mullins 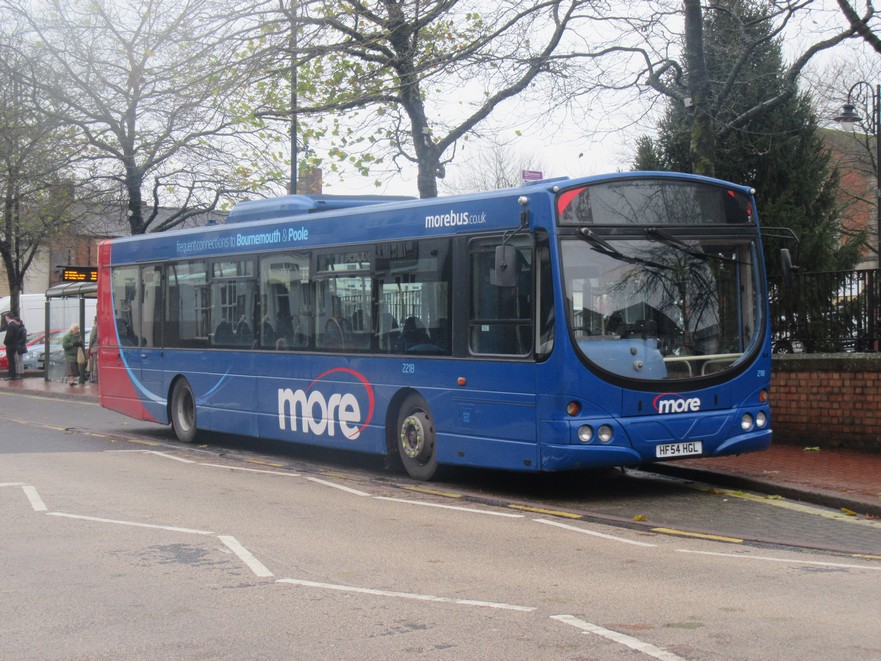 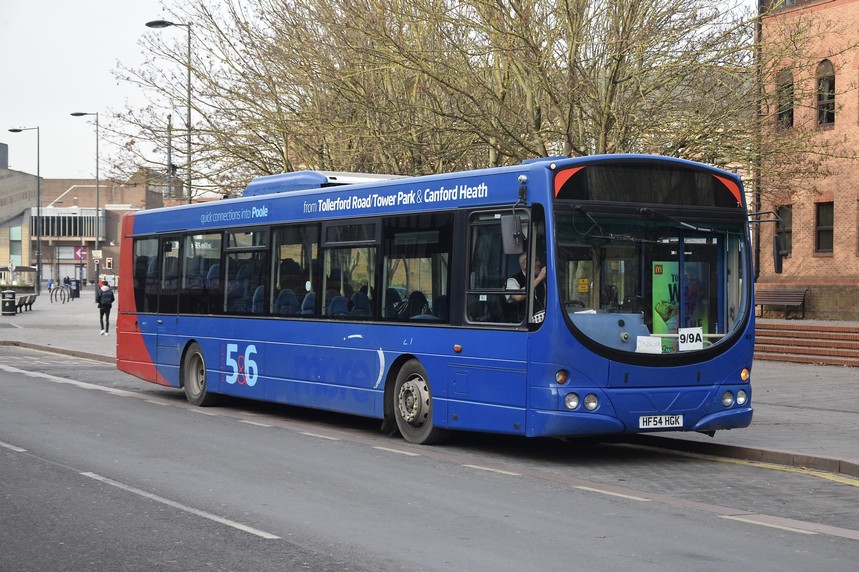 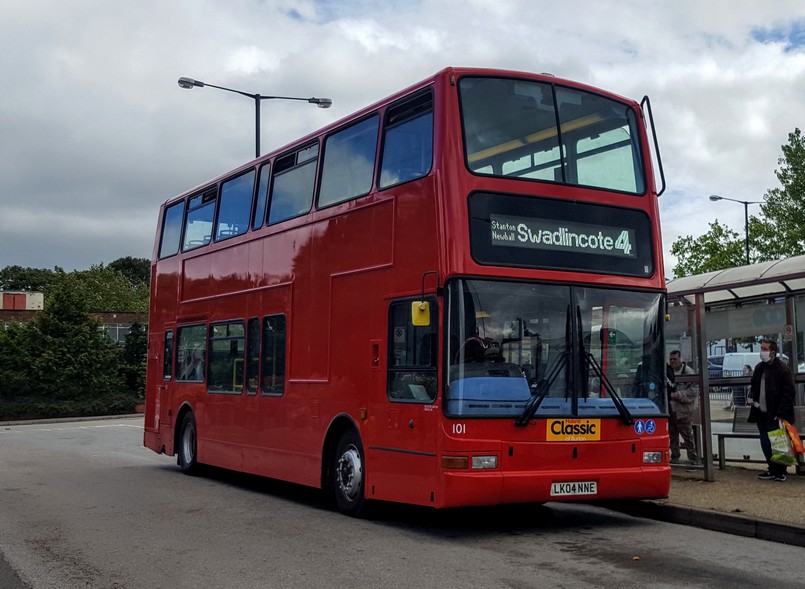 6 extra buses have joined the fleet as more buses will be needed to provide school services from September. All are Volvo B7TL/Plaxton President H66D, ex Metroline. They are set to enter service in London red. Details below. 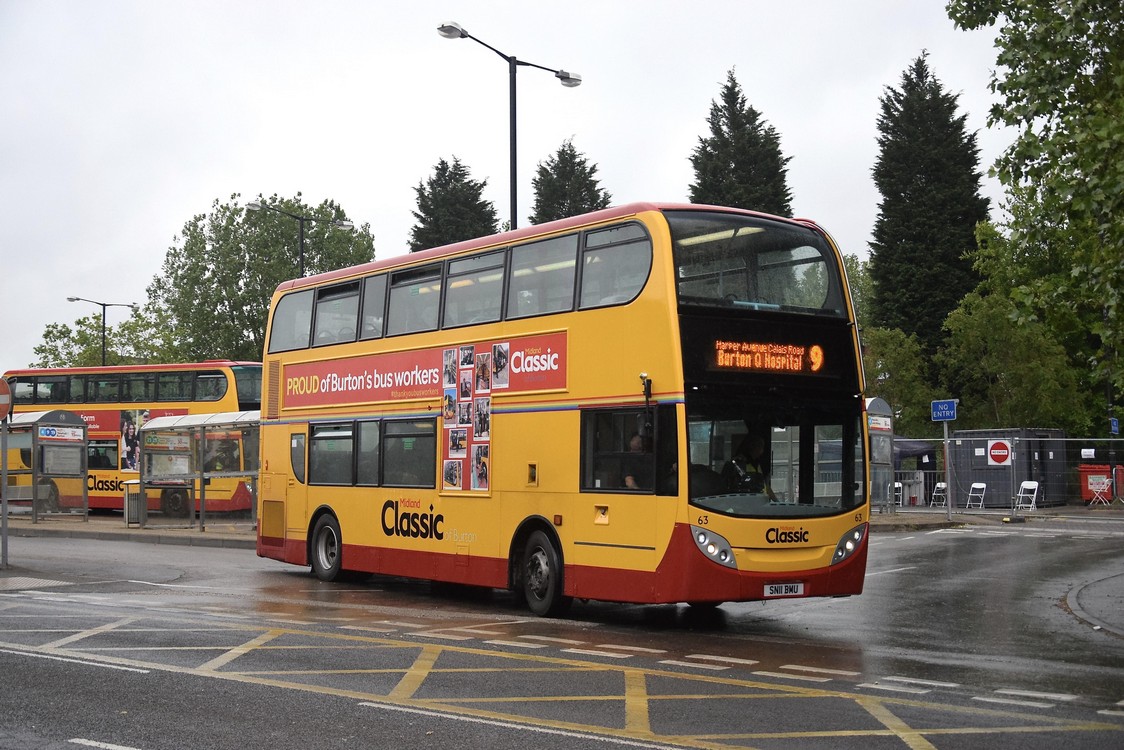 63 now carries fleet livery, complete with new style fleet name. It also has the addition of the rainbow stripe and adverts thanking key workers for their efforts throughout the current situation.
(C) Geoff Girling 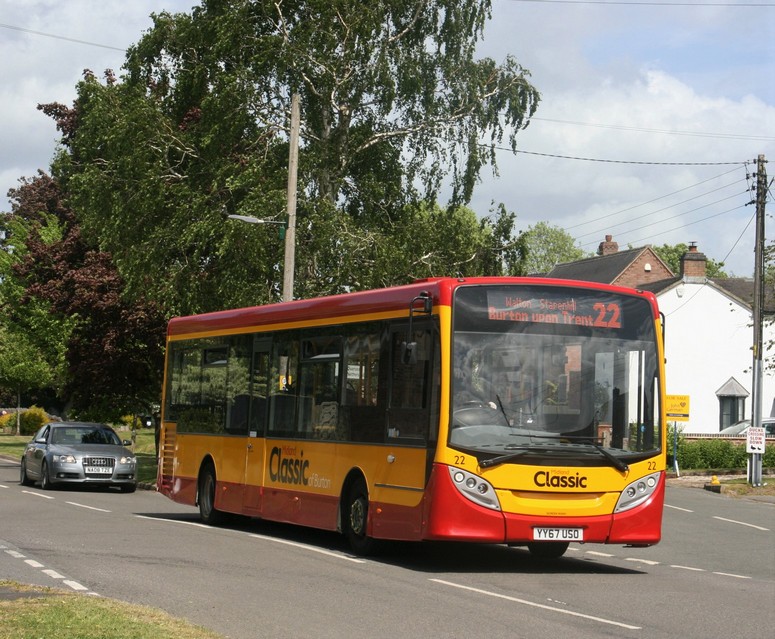 Burton Corporation liveried E400 number 63 has been repainted into fleet livery, complete with rainbow stripe between decks, and messages thanking NHS and key workers in the advertising areas.

A new style "Midland Classic of Burton" fleet name is being applied to the fleet.

Metrocitys 4 to 9 all now carry the revised base livery for route 9.

Metrocitys 4 and 8 now carry the revised livery for route 9. Number 5 and 9 are expected to be painted soon. 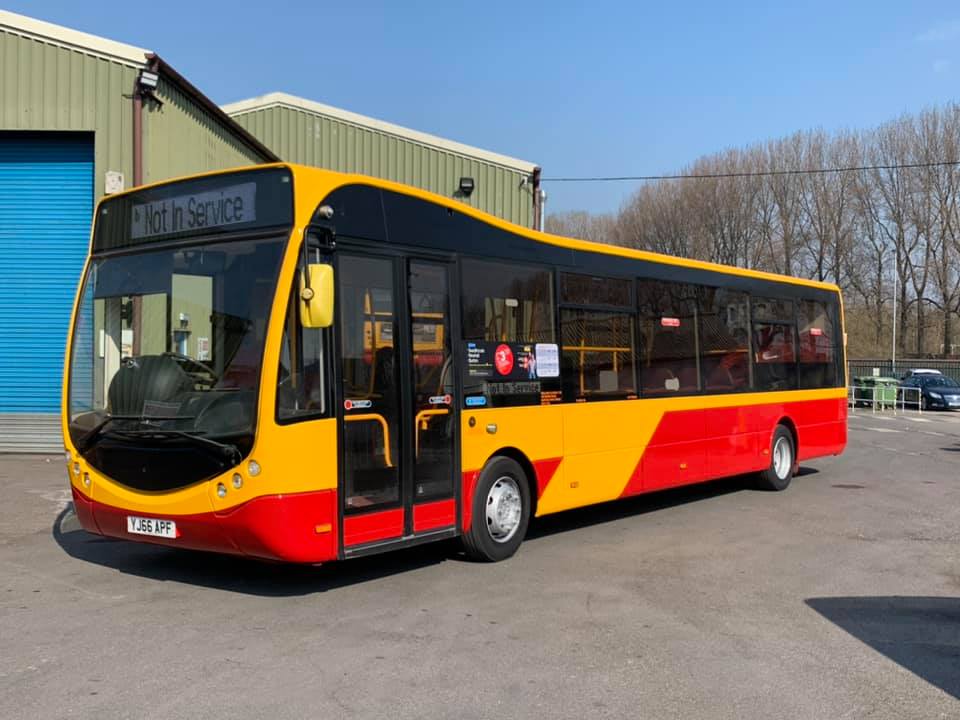 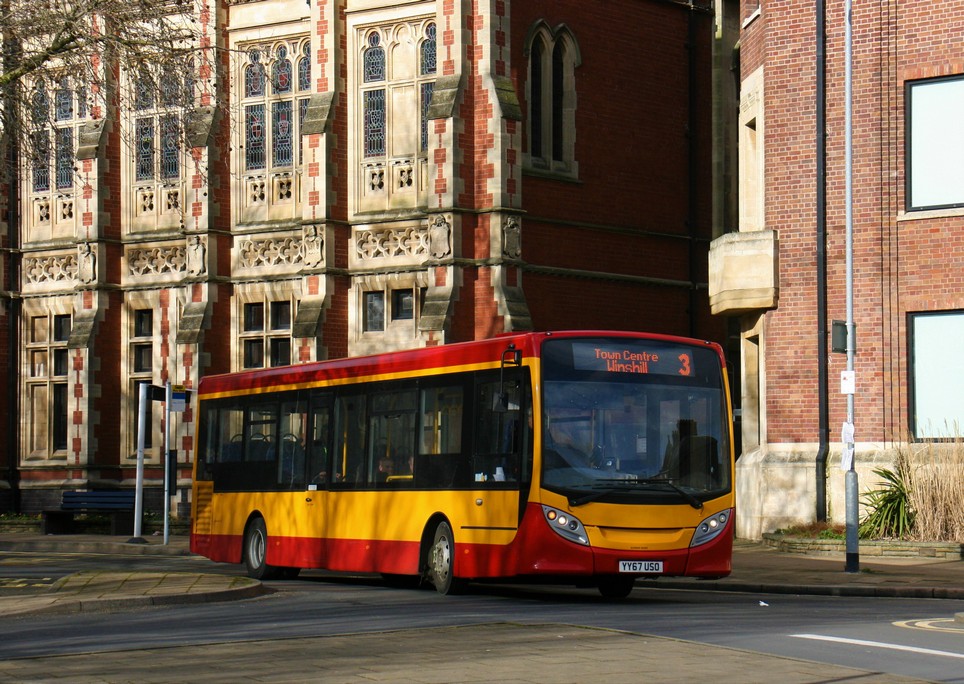 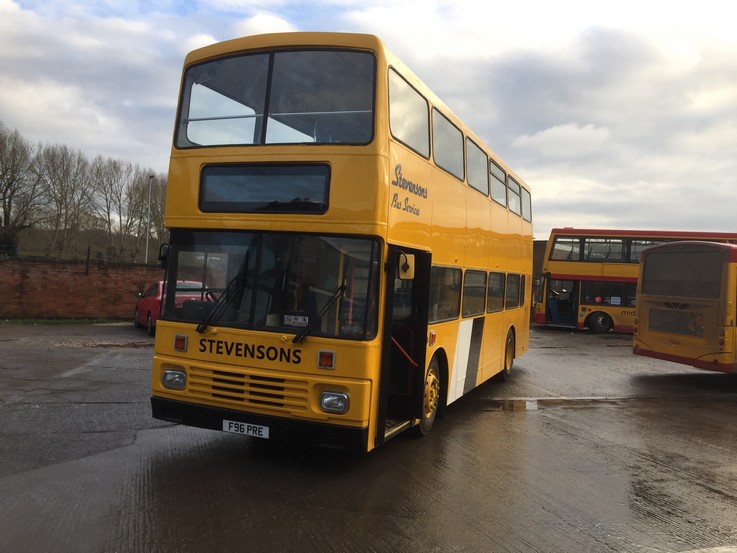 6th February 2020
The last 2 ex Lothian Tridents have been re-registered, all now in service (full list is below in previous update). (SIL 7025) and (SIL 7028) remain in Lothian livery. A new paintshop/workshop is currently under construction, so they are unlikely to be painted until this is up and running. 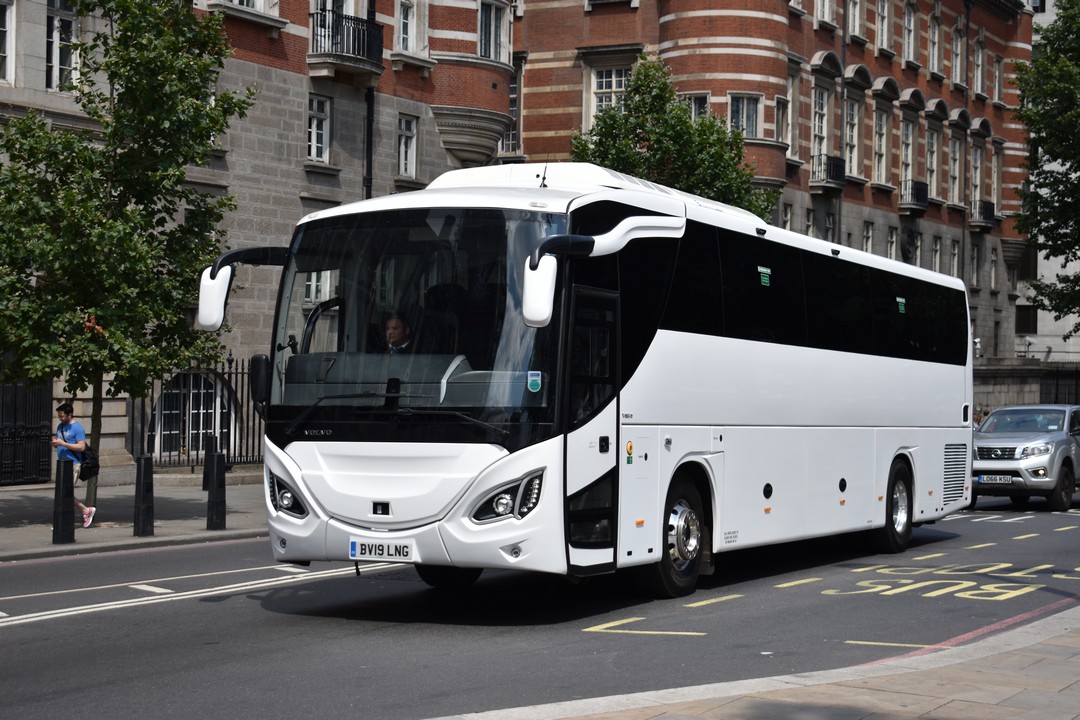