***Trent: Order placed for 13 Solos.*** ***Arriva: New Solos and Omnicities now in service - last Marshall Volvo Citybus withdrawn.*** ***More new buses for Stagecoach Chesterfield*** ***More Solos at TM Travel***
Here you will find all the latest bus fleet news for many bus operators in and around the Derbyshire area. If you have anything to report please contact me by clicking here.

11th November:
Citybus 4351 has been withdrawn. This was the last Derby City Transport vehicle in use here.

Scania 4195 is thought to be withdrawn too. 3467 is currently in the workshops, and is likely to move on soon. 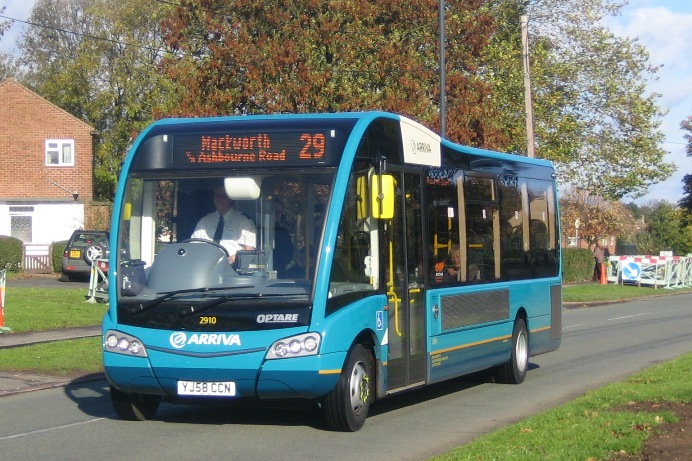 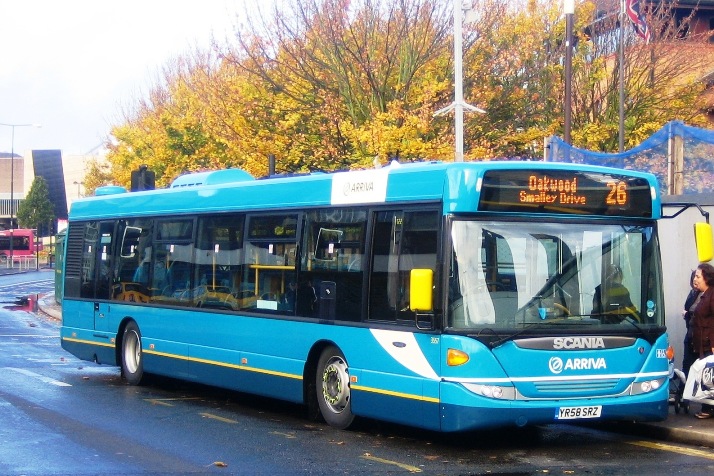 26th October:
The last Marshall bodied Citybus 135 (B135 GAU) is amongst the buses that have now been withdrawn, details of others are not yet known.

23 new buses have arrived and shall be in service this week. They are:

After a short stint here, at least 2 of the East Lancs European bodied Scania single deckers have been took out of service.

19th October:
Citybuses 4325, 4329 and 4333 have all been sold to Ensign (dealer), who have loaned 4325 and 4329 to Geldard's Coaches, Leeds.
MPD 2274 (FK52 MML) has arrived here from Burton. Dart 2215 has gone to Burton in its place. More of Burtons MPDs are set to be transfered in.
3 of the new Scania Omnicities had arrived at Ascot Drive on Saturday. At least a further 6 are in the country (arrived at Hull from Poland). 15 are due as part of the first batch.
East Lancs Dart 2198 (L38 PNN) has gone for scrap.
The website for the Derby operations has been launched and can be found at: www.arrivaderby.co.uk

Sat 30th November
Scania (YN04 AGY) is away for repaint into the revised Ilkeston Flyer livery (pale blue).
Vario (V707 ENN) has been sold to an operator in the Aylesbury area.

22nd November
The Spectras are thought to be sold soon, to be replaced by some Northern Counties Scanias from Stagecoach Manchester.
Thanks to Adrian Healey for the above.

19th Oct
3 recent additions to the fleet are Scania coaches (YN08 DDJ), (SN03 CLZ), and (YN07 LFZ) (a Scania I4 59 seater, believed the only other one operated in the UK belongs to Jacksons Travel at Blackpool).

2nd November
New additions to the fleet are 2 SLF Darts with Plaxton bodies. They are 53 (V400 CBC) and 54 (V700 CBC). 53 is being repainted, whilst 54 has already entered service.
Both were previously operated by Gibson, Paisley.

28th October
Former Trent Darts 17, 19 and 22 have all been repainted along with former Reading Metrobus 79. 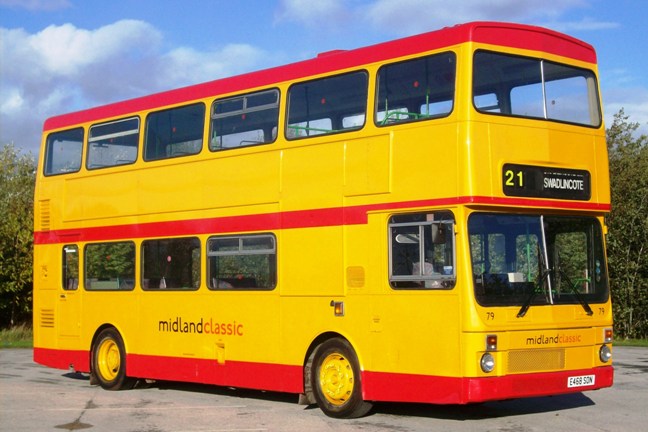 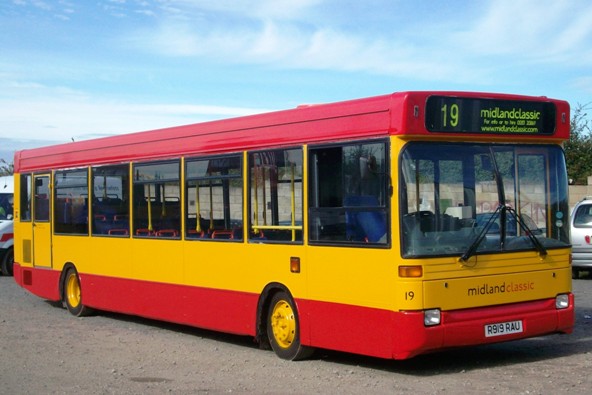 22nd November:
Two Optare Excels 35023 & 35025 (P937SSK & JAZ9851) have arrived from Scotland after Stagecoach takeover of Rapsons. These are expected to replace the two ELC Sprytes which will return to Sheffield. However, these may not see service for a while yet because of various problems, one of them even has fungi growing inside the passenger saloon!

The third Rapsons Excel 35024 (GAZ 4632) has been sold to Dunsmore, Larkhill (dealer). All three were new to Easy Yorkshire. 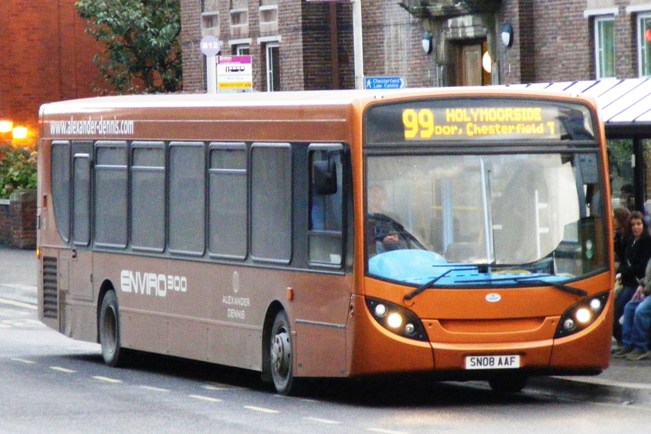 Mansfield: 7 MAN Enviro 300's in the next few months for the Nottingham - Mansfield - Chesterfield Pronto Service.


NEWS
22nd November:
New Optare Solo (YN58 NDV) has arrived and carries full livery.
Former Dublin Olympian (P487 SWC) is now here.
The Demo Primo has returned to the lease company.
Dart (S779 RNE) is in the new livery style. Thanks to Adrian Healey for the above. 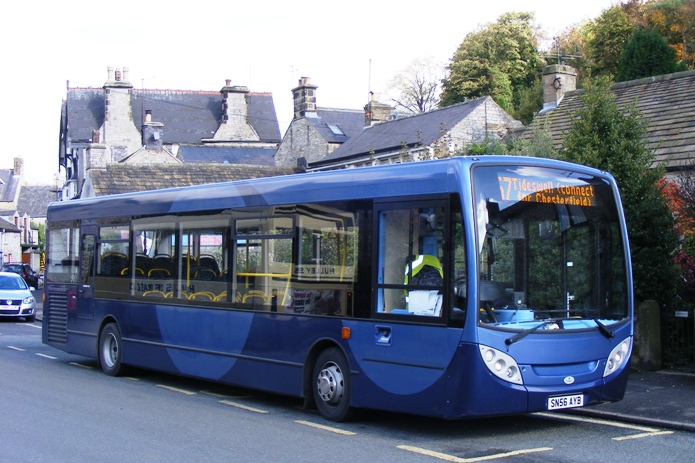 3 Leyland Royal Tiger Doyen coaches have been acquired here, one of which is for the preserverd fleet, the other 2 will be stripped for spares.

An ex Roadcar/Stagecoach Lincolnshire Tiger, an East Lancs rebody, is also at Fan Road at the moment.

1st October:
A recent addition to the fleet is DAF / Ikarus coach (T112 AUA). It is in use painted white with red fleet names. Thanks Ian.

NEWS
26th November:
Transpeak Excel 156 remains at Meadow Road garage along with 199, so it may not have been sold. Both are withdrawn.

Tempo 306 is away for repaint into a pale blue livery for the Ilkeston Flyer route. it shall be in service from December 7th.

Scanias 601-4 are being painted for the H1. The green livery will be retained, although the section beyond the rear wheel arches shall be bright orange, to advertise the extra capacity compared to the Solos! Each bus will be out as soon as they are ready, the complete set out by mid December.

Former Rainbow 5 Scanias 623, 624 and 625 have all been repainted into standard trent barton livery. All have had LED displays fitted too, and are currently based at Nottingham.

Kinchbus are no longer expecting any of the rainbow 5 Scanias. Routes expected to be upgraded using these vehicles include: H1 (see above), Villager, amberline, and route 18.

14 more Wrightbus Volvos have yet to be delivered. 8 will be based at Derby for the Mickleover, and 6 at Langley Mill for route 15. Route 15 is being extended to serve East Midlands Airport, on an hourly frequency from January.

Orders for more buses on order for 2009 have not been confirmed, but are thought to include the Solo+ and Mercedes Citarios.

21st November:
Unibus Paladin 104 has been repainted in the revised livery (blue and white).
Excel 225 was involved in an RTA in Disley on Thursday.
Scania 623 (ex R5) has been repainted into trent barton red and is in use at Nottingham. An LED display has been fitted too.
Transpeak Excel 156 has been withdrawn, and is said to have been sold.
Tempo 306 is away for repaint for the Ilkeston Flyer. The livery is expected to be two tone blue.


4th November:
Coach 72 has been repainted white and sold back to the Volvo dealership.
N+D Darts 891/2 continue in use whilst Paladins continue to be painted. More have been fitted with seatbelts too.

26th October:
Transit Magazine reports that trent barton have placed an order for 13 Optare Solos. They are of the new variety, that has yet to be officially launched. The Solos are thought to be fitted with hi-spec interiors, now becoming standard in this well respected fleet.

1 journey per hour on Route 15 is to be extended to East Midlands Airport from 25th January.

N+D Darts 891 and 892 have been on loan to Sutton, after a number of buses were damaged after coming under attack by locals with missiles.

Paladins 114 and 116 now carry Unibus livery. The later shall be based at Sutton for a high peak contract. 106 has returned to Dove Holes. 103 and 113 are being repainted into the new style Unibus livery (blue and white).

Indigo is due to be launched on Sunday 9th November.

19th October :
Indigo is expected to be launched mid November.
Dart 909 has been repainted in trent barton livery.

1st October :
Minibus 39 has not been scrapped, as previously reported. Sorry!

Some news on Wellglade buses that are now with other operators:

Vario 284 is now with Ashall's Coaches, Gorton, Manchester. It arrived in June, and can be seen on GMPTE tendered route 243 from Partington to Trafford Park. It has been repainted white.
OR Jones of Llanfaethlu have acquired Delta (J303 BVO). This was previously with Tyrer in Lancsashire.
Deltas 300 (G600NRC), 346 (K346FAL) and Metrorider 218 are with Ellie Rose, Hull.
Citybus 609 (F609GVO) now at Isle Coaches, Owston Ferry.
Metrorider 216 with is now with Hanson, Pontefract whilst 219 is with a Jazz Band in Barnsley!