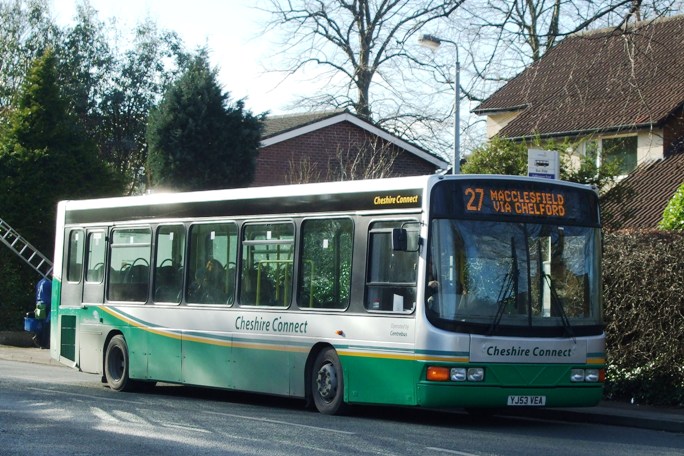 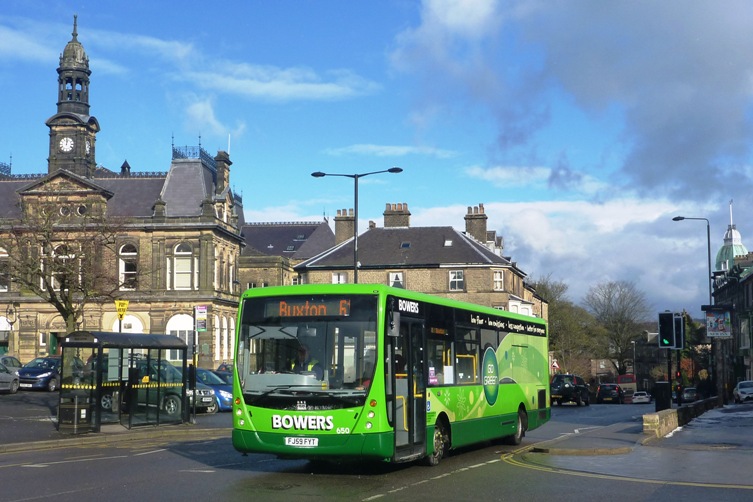 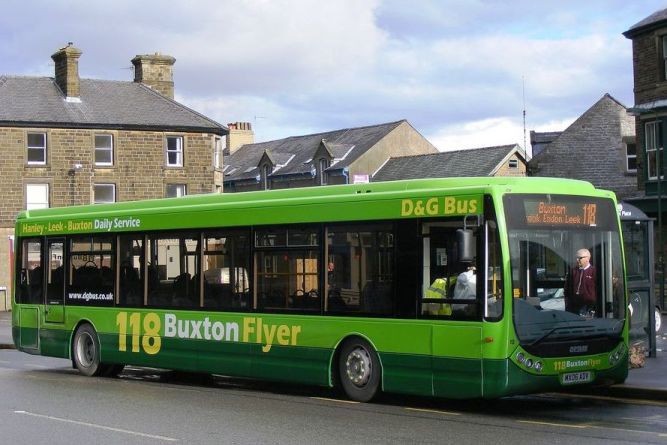 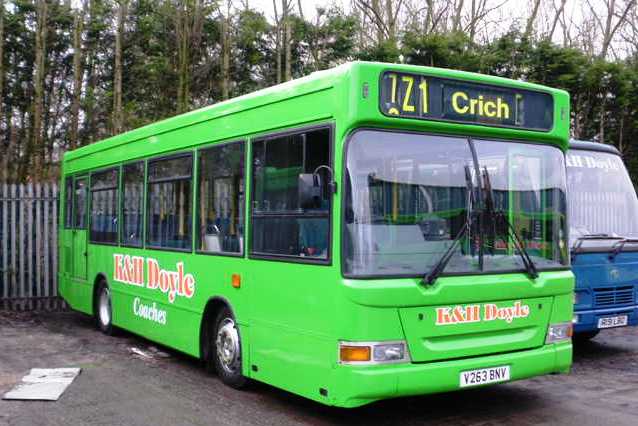 9th October
Minibus (L430 CPJ) has been cut to pieces in the yard. 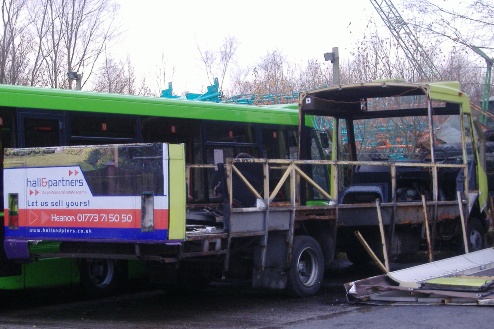 13th March
A new Volvo /plaxton Centro has arrived in all over white. It is currently away for repaint. Reg unknown. 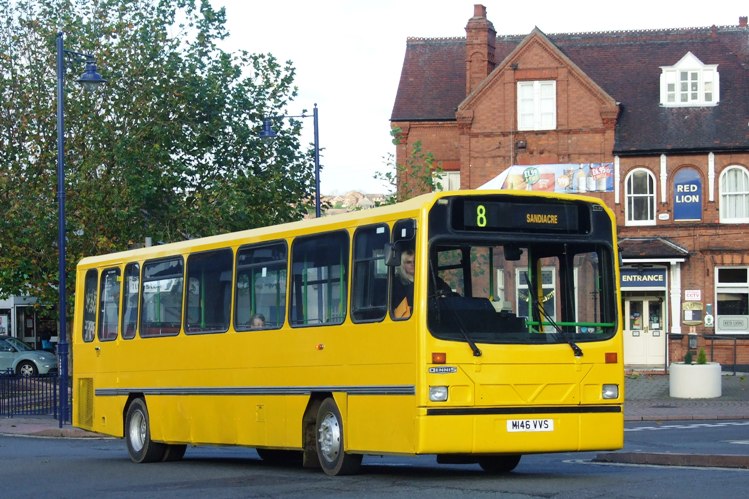 February 12th
A brand new Volvo B7R is due in March. Thanks Andy. 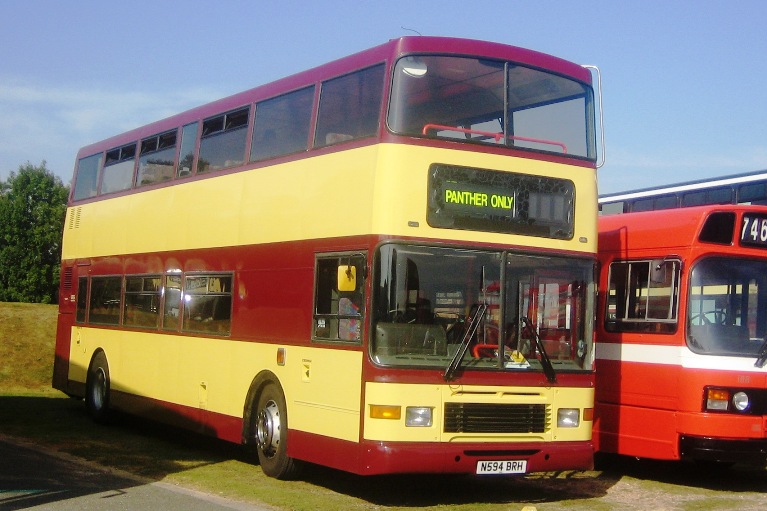 NEWS + SIGHTINGS
21st March
Dart (PL06 TGF) is now numbered 18.
Hulleys Dennis Lance 18 has been sold to a Preston area operator for schools and is due to be collected on Saturday 6 March. 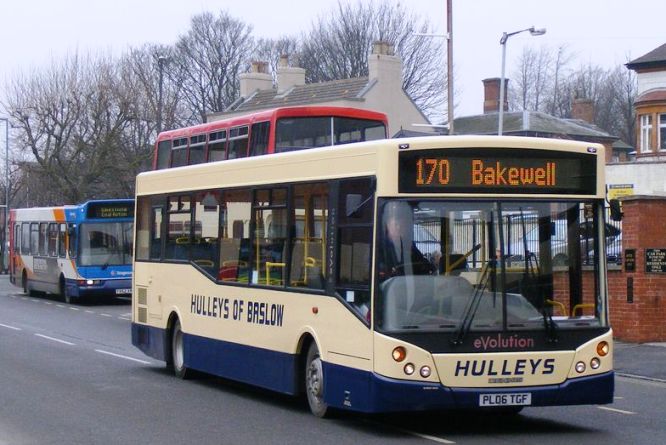 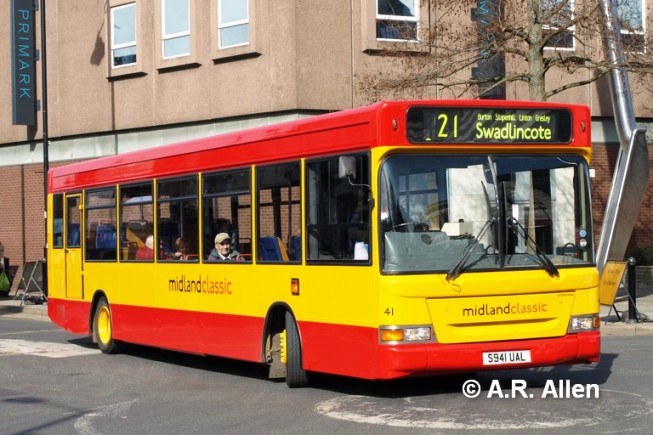 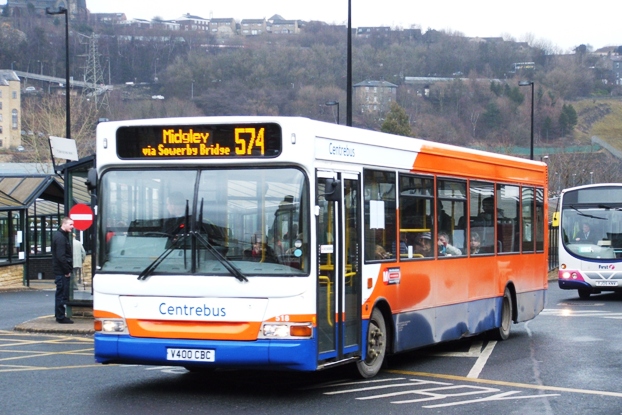 2nd March
A correction to last months news, is that Dart 54 (V700 CBC) has moved to Midland (associated with D&G) - not centrebus as previously reported. This requires a new engine before it enters service as number 2700. Thanks Jack.

Darts 53 (V400 CBC), and 55 (R505 SJM) have moved on to Centrebus, following the arrival of the 3 new Volvos. 53 and 55 have been repainted and are in use with Huddersfield Bus Company.
New Volvo 81 (MX08 NNU) has been re-registered with personal plate (JB08 MCL). Two more Wright bodied Volvos have arrived here. 82 (AE57 FXW) is now in service after being painted into fleet livery, and 83 (KX57 MTE) is currently away being painted. 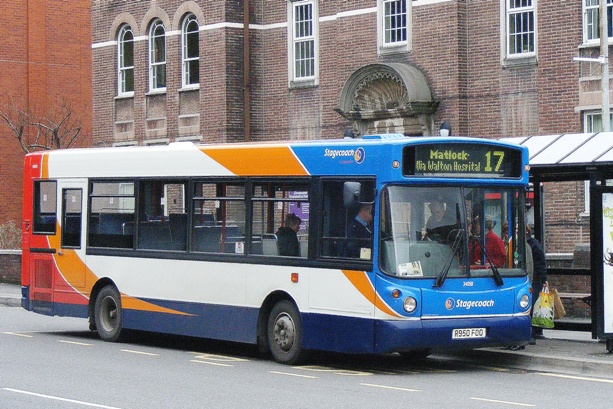 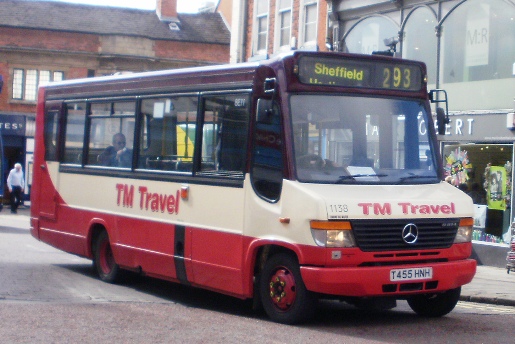 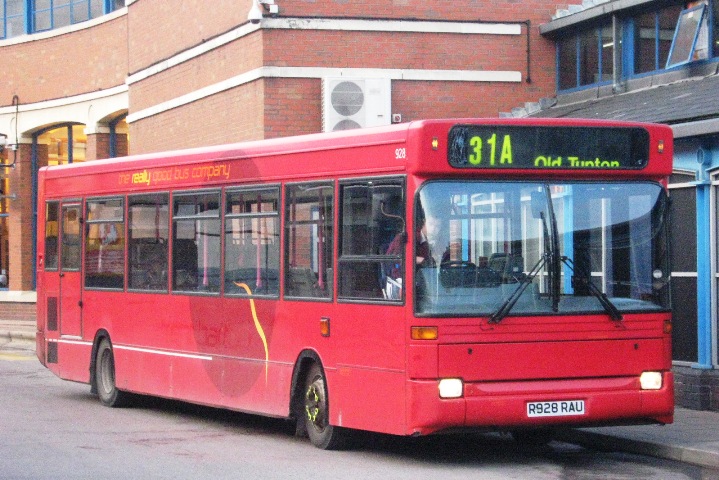 2nd March:
Paladin 112 is on loan from notts+derby, for use on school services.
Dart 921 is currently off the road. A new engine is required!
Excel (P505 OUG) has been re-instated due to a shortage of vehicles.
It is thought a number of vehicles will be out-stationed at Trent garages in the near future (Sutton and Matlock seem likely) to reduce dead mileage. A number of additional vehicles (possibly around 10) will be needed later in April for additional work. More ex Trent Darts are thought to be heading to TM Travel.

Tiger (FRN 816W) has been saved from scrap by Dave Kelly. 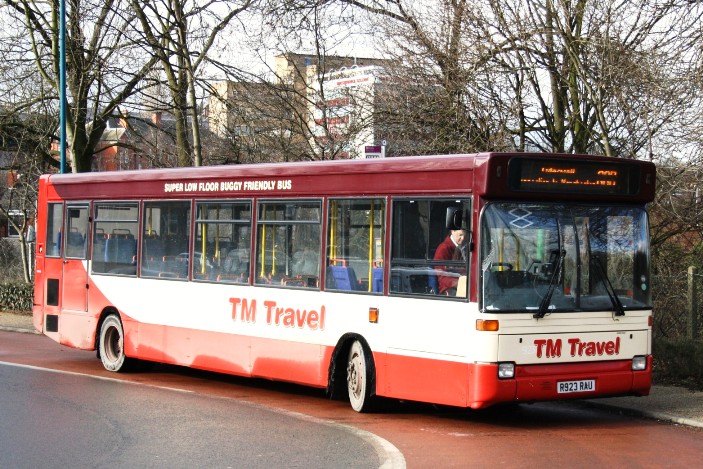 923 seen here in Chesterfield with TM Travel. The vehicle was based at Belper when with Trent, and more recently with Kinchbus.
(C) John Milnes

Radcliffe Line Scania 618 is expected to transfer to Kinchbus, Loughborough.

2nd March:
Excel 259 has arrived at Derby, repainted in multi coloured stripe livery for Derby College Shuttle duties. 258 to follow.
223 now at Derby painted up for Unibus 6. 222, 231/2 at to follow.
Vario 290 has been repainted into notts+derby livery. Although the other Varios are being withdrawn, 290 is to be retained due to its high back seating and being fitted with a tachograph.
Volvo coach 63 and Spondon Flyer Scania 632 are currently away for accident damage repairs following a recent collision on the A52.

February 25th:
7 new Solos are on order. 6 are for Nottinghams Radcliffe Line service. The 7th is for a new "DASH" service in Burton, which is a funded service linking the town with the Centrum 100 business park.


Bingham Xprss Optare Tempo 304 is the first to be refurbished with leather seats etc, and also be re-painted in a modified livery. 304 is seen here leaving Nottingham.
(C) L H Transport Photos 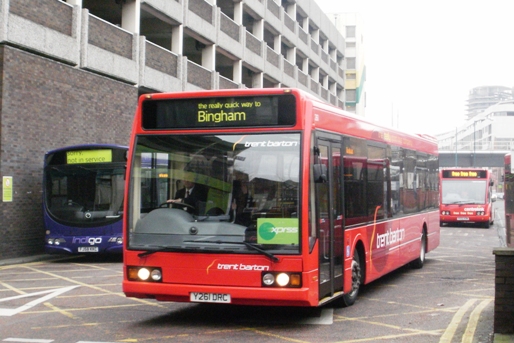 Former Skyline (Buxton) Excel has been repainted in trent barton livery. 261 is on loan to Nottingham whilst the Bingham Xprss Tempos are being refurbished. No other Excels are based at Manvers St.
(C) L H Transport Photos

February 12th:
The Bingham Xprss Optare Tempos are to be fitted with leather seating. Brand new Solos are expected for the Radcliffe Line services this spring.
Former Skyline Excel 261 has been repainted into trent barton red livery. It is currently based at Nottingham.

Former Mickleover Excels 222/3, and 231/2 should soon be back in Derby. They are to be painted in Unibus livery for use on notts+derbys unibus 6 route.
Excels 258/9 are to be painted for notts+derbys Derby College Shuttle. Former Cotgrave Excels 214/5 may also be going to N+D.
Excels 260/2/3 are expected to go to Sutton Junction to replace Darts.

264 is expected to be painted for the ONE service (Derby - Ashbourne), which is likely to see an increased frequency later this year.

The Derby Shopper Hopper service is to be withdrawn from 13th March.

February 7th:
5 new Scania Irizar coaches are expected in July. The 5 new coaches are for use on the red arrow service, alongside the current vehicles. The frequency of the service is expected to be increased to every 10 minutes between Derby and Nottingham and every 30 mins to Ripley, Alfreton and Chesterfield this summer.

January 26th:
The TM Travel fleet have been added to the Wellglade fleet list, which should now be correct. The fleet numbers are begining to appear on the vehicles as per the rest of the Wellglade fleet.
Dart 921 is now in use, with 923 set to follow soon. Both have been repainted and have been fitted with orange LED destinations.
Excels 1136 (R213 DKG), 1139 (R379 DJN) and 1140 (V389 KVY) are now withdrawn. The first is now stored at Langley Mill, with the other two set to follow.

Yourbus Scania (RDZ 1714) is seen here in the short lived orange livery. The orange was removed less than a week after the vehicles went into service due to concerns that it was too similar to NCTs orange line livery.
(C) R Hadfield http://www.thebusparade.fotopic.net/ 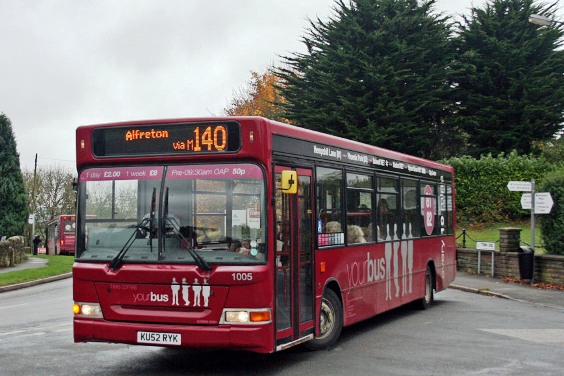