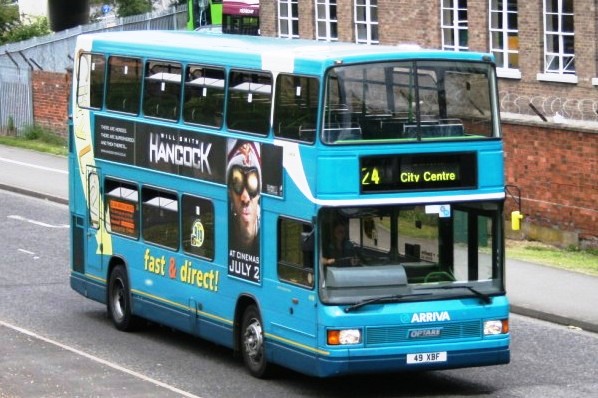 Spectra 4698 is one of the recent arrivals at Derby.
(C) David Allen

3rd June:
Fleetline 4301 has continued in service so far this week, but broke down on station approach this afternoon, and was stuck there for a few hours! The end of Fleetline operation in Derby?
Here is an updated summary of the expected forthcoming fleet developments:

OUT (withdrawn / to be withdrawn)

June 6th:
Excels (R211/2 DKG) have arrived here. One of the two is in service in all over white livery.

NEWS
25th June :
Former kinchbus Airline Shuttle Dart 918 (R918 RAU) has been repainted into trent barton livery. it is now based at Sutton Junction.
Some purple Volvo saloons have arrived at Langley Mill - these are destined for use on the Rainbow 5 route later this year.
Red Arrow coach 68 is the 4th of the 8 coaches back in service after repaint and refurbishment, 66 is away now.
X38 branded Tempos 307/8 have been fitted with LED destinations. Scania 638 was on loan to Derby whilst this was done.

4th June :
Sixes Solo 419 caught fire in Blackbrook on Tuesday evening and as a result whats left of it has been withdrawn.

3rd June :
Barton celebrate 100 years in October. For more details of the planned celebrations CLICK HERE.
Red Arrow coach 68 is away for refurbishment (not 70!).
Former Kinch minibus 818 (N818 RFP) is now with Bankfoot Buses of Perth.
Heartlands Travel have purchased Vario 275 (R275 RAU). It is now all over white livery.

1st June :
Red Arrow coach 71 back after refurbishment and repaint.
Paladins 132/3 have been fitted with seat belts and also have tachographs fitted. Olympian 723 has also had a tachograph fitted, and are available for private hire work.
transpeak coach 60 is having alot of welding done to pass MOT.
SIGHTINGS
Sightings will no longer appear on this page. They can be read and reported by clicking HERE