A few photos, and captions from Derby City Transport days.  Many thanks to Andy Gaucher for the photos and captions on this page. 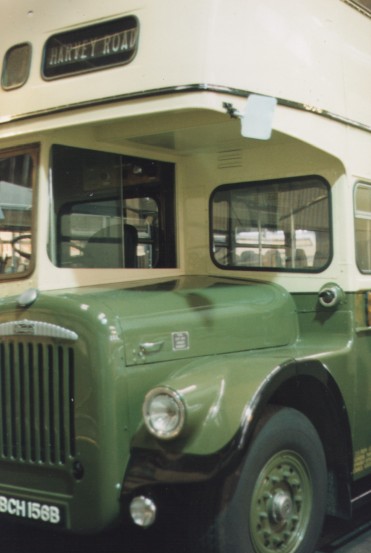 The first photo is of the Daimler Backloader 156 whilst it was in the front workshop at Ascot Drive just before it departed the garage after a period of several weeks when the fitters practically rebuilt it from the floor up. The badge at the front is a fibre glass replica because the original metal one was stolen whilst it was in the shop. 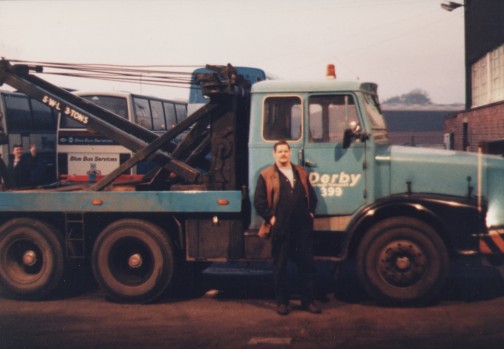 The second photo is the recover truck which had its own fleet number 399 and was in use more than the management wanted (mainly thanks to buses breaking down a little too often and Derby's generally appauling car drivers). "Big Mick" is standing in the foreground having just arrived back at the rear of the old workshop next to the steam ramp with a couple of the Plaxtons Blue Bus Services coaches in the background and what I think is a fleetline. The other figure is Frank, who seems to be ordering two full breakfast cobs rather than his usual three. 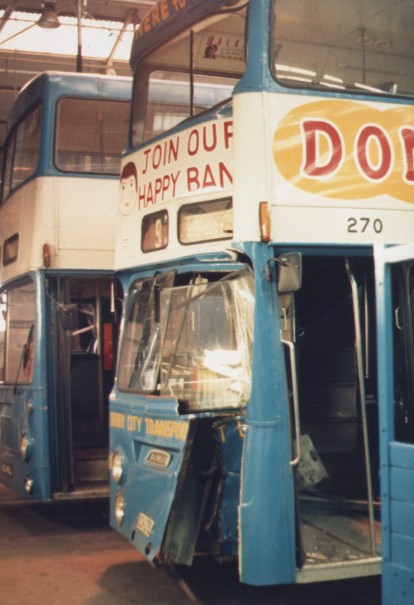 The third photo is one which you may not of seen before because at the time of the incident Gerald Truran made a point of telling the workshop staff that under no circumstances should photos be taken of this bus. It's 270, a daimler fleetline if memory serves which had been painted up by Geoff and Eric in the paintshop to have various slogans on it as part of the campaign to either stave off privatisation or competition (can't remember which). One morning during a particularly wet spell of weather it was being driven out of the depot, as the driver approached the front of the running shed it hit one of the pillars (opening closest to the inspectors office), alledgedly at 4mph which resulted in the damage to the bus seen in the photo. The steel pillar ended up with an 18" kink in it and had to be replaced. The bus was eventually scrapped I believe because the damage was more extensive than first realised, even the stantions at the rear of the upper deck where twisted by the impact. The management attempted to discipline the driver and whilst they were in the running shed examining the state of the floor (imagine a perfectly flat concrete floor, covered in oil spots, tyre rubber, diesel etc which then has rain water on it because the smoke vents in the roof hadn't work for many years as well as water coming off the buses after they had gone through the bus wash), so as the engineering director, general manager, engineering manager, several chargehands and foreman are stood discussing the state of the floor and what could be done to improve it when a spare bus was be driven into the running shed, the driver, seeing the managemental huddle for some reason panicked or was otherwise distracted, hit the brakes and slid straight into the back of another bus already parked up. It certainly got the point across that the floor may have contributed to the demise of 270. Incidentally, the reason GT didn't want photos being taken of 270? Those slogans were changed to read "Join Our Happy Bang", "Derby Slippy Transport" etc, there was also a large accident job sticker on it which read "Near side headlight in need of adjustment". #